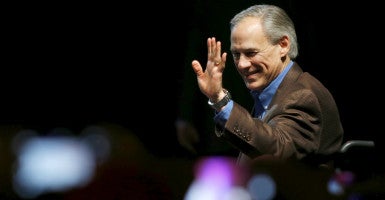 The governor of the state leading the legal fight against President Barack Obama’s executive actions protecting illegal immigrants from deportation predicted today that “the best we can hope for” is a deadlocked decision by the Supreme Court.

That’s the difference the vacancy on the court left by the death of Justice Antonin Scalia makes, Texas Gov. Greg Abbott said during a briefing for reporters at The Heritage Foundation.

“Certainly before Justice Scalia passed away, I felt our chances were good; if the court were to rule solely on basis of the law, it should be an 8-0 decision,” Abbott said of the opposition’s chances, adding:

Because politics is being played on the U.S. Supreme Court, I think the best we can hope for is a 4-4 split decision, the consequences of which will mean we will win—but it won’t be a broad-based application around the United States affirming that the president doesn’t have authority to do this.

The eight remaining justices on the Supreme Court heard arguments Monday in the case arising from Obama’s executive actions to protect millions of immigrants living in the country illegally from deportation. Based on their questioning, the court seemed divided between its four liberal justices and four conservative-leaning justices. Scalia was known as a staunch conservative.

A 4-4 tie would leave in place an appeals court ruling blocking the Obama administration from implementing the president’s plan. But it would not set Supreme Court precedent, meaning a future challenge could come before the court after a ninth judge is confirmed to succeed Scalia, who died Feb. 13.

The case, brought by Texas and 25 other states, challenges Obama’s executive actions to benefit as many as 5 million illegal immigrants who are the parents of U.S. citizens or permanent resident children by allowing them to apply for temporary protection from deportation and for work permits.

Another part of Obama’s plan would expand his already existing Deferred Action for Childhood Arrivals (DACA) program, which allows those who were brought illegally to the U.S. as children to apply for temporary protection and work permits. Abbott, a Republican, is considered the driving force of the state-level resistance to Obama’s actions.

Shortly after Obama announced his executive actions in November 2014, Abbott, who was attorney general of Texas at the time, led the effort to put together a coalition of mostly GOP-controlled states to challenge them.

In his briefing for reporters today in Washington, D.C., Abbott described what drove his decision to pursue a lawsuit—which he said was the 31st legal challenge he has brought against agencies and programs of the Obama administration.

“Immigration just happens to be the topic this lawsuit was framed under,” Abbott said. “The lawsuit is about presidential power, and is not about immigration.” He added:

The administration contends the president has broad authority in choosing who to deport and who not to deport, and that the federal government does not have the resources to deport all of the roughly 11 million immigrants in the country unlawfully.

Administration officials say it makes sense to expend those resources on illegal immigrants who are convicted criminals, and on recent arrivals, rather than on those who are more settled and have broken no other laws since arriving in the country.

Before the Supreme Court answers the question over whether Obama acted within his authority, the eight justices must consider whether the states challenging the president’s actions would suffer direct harm that gives them standing to sue.

During Monday’s arguments, Solicitor General Donald B. Verrilli Jr., the U.S. government’s top appellate lawyer, argued that Texas had not suffered direct and specific injury that gave the state standing to sue.

Texas contends the executive actions would cause harm by costing the state money to give subsidized driver’s licenses to those who qualify for protection from deportation.

But Verrilli countered that Texas chose to create its own policy subsidizing the cost of issuing driver’s licenses, and that the state could simply change its law to block licenses to those who benefit from the president’s actions.

Abbott predicted today that Texas and the other 25 states will prevail on standing, and he disputed Verrilli’s argument over the driver’s license issue.

“I think the standing issue we are going to win,” Abbott told reporters, adding:

If they are saying the federal government can force and tell the state of Texas how to operate our driver’s license operations, then everything the 10th Amendment stands for has been completely eliminated. So, we double dare the United States Supreme Court to reduce the Bill of Rights to the first nine amendments.

Abbott would not say if he would push to deny driver’s licenses to those in Texas who qualify for deportation protection under Obama’s executive actions if the states ultimately were to lose the lawsuit.

“I will cross the bridge when we get to it,” the governor said.