After 300 Days and 164 Cosponsors, Bill to Protect Religious Liberty Stuck in Congress 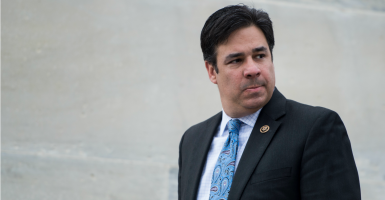 After almost a year, a bill designed to safeguard religious liberty has gained significant support but little momentum in the House of Representatives.

With 164 cosponsors, the First Amendment Defense Act is a popular piece of legislation in Congress. Still, that popularity hasn’t provided the elevation needed for the bill to advance out of committee, let alone into law.

Chairman Jason Chaffetz, R-Utah, along with 22 other Republicans on the House Oversight and Government Reform Committee, has co-sponsored the bill. Altogether, only three of the co-sponsors on the committee chose to comment on the story when contacted by The Daily Signal. The other 20 declined to go on the record.

Asked about the delay, a Chaffetz aide told The Daily Signal that the Utah lawmaker needed more time to review the legislation. The seven-page bill was referred to committee last June, more than 300 days ago.

Across the country, similar legislation has been proposed at the state level, sparking significant controversy. On April 5, Mississippi signed a religious liberty bill into law, while similar legislation was vetoed by Georgia Republican Gov. Nathan Deal.

Pointing out that “states [are] making religious freedom a priority,” Rep. Raúl Labrador, the Idaho Republican who sponsored the bill, is ready for a vote. “The First Amendment Defense Act deserves a vote on the House floor,” he wrote in a statement to The Daily Signal.

“The time has come for Congress to act at the federal level,” Labrador said. “My bill ensures there is respect for all views of marriage in our free society.”

The act would prohibit federal discrimination against individuals or organizations based on their support for marriage as exclusively between a man and a woman. The bill would bar the Internal Revenue Service, for example, from stripping a nonprofit of its tax-exempt status over the organization’s views on same-sex marriages.

Dan Holler, whose group Heritage Action has come out in favor of the bill, described the legislation as “an important first step.”

“The fight to protect religious liberty can’t be left solely to the states,” Holler, vice president of communications and government relations at Heritage Action, said. “Congress must ensure the federal government does not use its vast, sweeping powers to discriminate against those who disagree with the Supreme Court’s decision to redefine marriage.”

Opponents argue that the legislation creates opportunities for state-sanctioned discrimination.

Soon after the bill was introduced, Sarah Warbelow of Human Rights Campaign described it as part of “an extreme agenda designed to harm LGBT families under the guise of religious freedom.”

Supporters reply that laws protecting conscience rights aren’t out of the ordinary.

Matthew Kacsmaryk, deputy counsel of First Liberty, points to 160 conscience exemptions already on the books that protect the rights of citizens who object to abortion, capital punishment, and military services.

Kacsmaryk, a former assistant U.S. attorney in Texas, describes Labrador’s bill as creating a safeguard to protect anyone “who holds religious or conscientious beliefs about marriage and ensure their First Amendment rights aren’t violated.”

Since the Obergefell v. Hodges Supreme Court decision that legalized same-sex marriage last year, conservatives have been pushing for conscience laws at both the state and national levels.

Though Kacsmaryk supports Labrador’s bill, he said it would take time for both sides of the debate “to settle on a sort of armistice.” He notes that it took four years for the states and federal government to develop conscience laws after the legalization of abortion.

“It just takes time in a country with one federal government and 50 state governments to effect that balance,” he said.

Rep. Mark Walker argues that the whip count shouldn’t matter. The North Carolina Republican, who sits on the Oversight Committee and co-sponsored the bill, considers a vote as being about “holding members accountable.”

There’s value in advancing the bill out of committee, Walker told The Daily Signal, so “the American people can see where we have good legislation and why [Democrats] don’t want to move it through.”