Did Chicago Violate Its Own Laws When Issuing Red Light, Speed Camera Tickets? 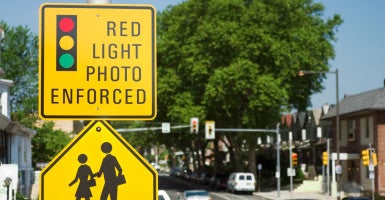 “The city didn’t care about safety, it cared about money, and this was just another way to get money from people,” an Illinois think tank writer says. (Photo: iStock Photos)

Drivers in Chicago who received tickets from the city’s red light and speed camera systems might see refunds.

City officials are currently embattled in a lawsuit with three motorists who charge that Chicago has failed to provide sufficient notice for individuals to contest or pay for tickets before deeming them liable.

If Chicago loses the case, officials could be forced to refund hundreds of millions of dollars in red light and speed camera tickets issued since 2003.

Austin Berg, a writer at the nonprofit Illinois Policy Institute, which advocates for government transparency, said the city needs to “play by its own rules” and should be held accountable for issuing “millions and millions” of dollars in tickets while violating its own law.

“It would be a victory if the people who had that money taken away from them get that money back,” Berg told The Daily Signal. “This is just one step in a long process and it remains to be seen how many thousands of people could get refunds should they ultimately rule in favor of the plaintiffs.”

The lawsuit advanced last month after Circuit Court Judge Kathleen Kennedy ruled against the city for implementing a system that violates the “fundamental principles of justice, equity and good conscience” of individuals. Kennedy deemed the tickets “void.”

But the city of Chicago is unlikely to change course. “The city continues to defend this case vigorously, as we believe that the plaintiffs’ claims are legally insufficient,” Bill McCaffrey, a spokesman for Chicago’s law department, said in a statement cited by Time Out Chicago. “The plaintiffs do not dispute that they violated the law and that they received notices of these violations. It is the city’s position that the plaintiffs are not entitled to any recovery, let alone any refunds.”

Jacie Zolna, an attorney with Myron M. Cherry and Associates who is representing the plaintiffs, is in the process of getting the lawsuit class certified so he can pursue legal action against the city.

The lawsuit claims that city officials under Mayor Rahm Emanuel’s administration failed to give motorists an appropriate amount of time to contest alleged violations.

Zolna said city law requires officials to give motorists a second notice of violation before terminating an individual’s ability to either pay or contest speed camera and red light tickets. Currently, he said, city officials are sending only one notice before determining that a motorist is liable.

“If you’re an ordinary citizen trying to follow the law you’d expect to get a second notice from the city so you have the opportunity to contest,” Zolna told The Daily Signal. “Instead, you’re getting found liable immediately, and then you can no longer contest that ticket.”

The lawsuit also argues that city officials sped up the amount of time required before a late fee may be imposed.

Zolna said law requires a 25-day grace period once a motorist is found liable for a ticket to pay the fine, which typically costs $100 before it doubles. Instead, officials were giving individuals 21 days to pay the fine prior to hitting them with a late fee.

“The irony of [Chicago’s] whole defense just hit me between the eyes,” Zolna said. “They’re demanding the citizens to follow these traffic laws—so much so that they have cameras all over the place recording people to issue these violations—yet they think they’re above the law and don’t need to follow the very laws that they’re trying to enforce against the citizens of Chicago.”

Kennedy rejected the city’s motion to dismiss the lawsuit Feb. 22.

Illinois Policy Institute’s Berg said the city illustrated no evidence that it used safety data to decide where to put the cameras, calling the fines a “desperate” move by a city attempting to “soak” taxpayers.

“What is abundantly clear, what isn’t murky at all, is that the city didn’t care about safety, it cared about money, and this was just another way to get money from people,” he said.