For California Teacher Taking on Unions, Supreme Court Ruling Isn’t the End of Her Case 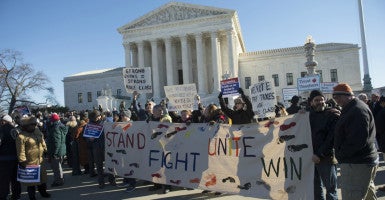 The Supreme Court issued a 4-4 decision in the case Friedrichs v. California Teachers Association, which challenged the constitutionality of agency fees that public workers in California are required to pay to unions. Rebecca Friedrichs, the lead plaintiff, and her legal team said they plan to file a petition for rehearing with the high court. (Photo: Kevin Dietsch/UPI/Newscom)

But Friedrichs and her legal team contend that their challenge to unions is hardly over. Rather, the 28-year California teacher told reporters she was prepared for a split ruling from the Supreme Court, and now, she and her legal team are planning to file a petition for a rehearing with the high court.

“All of us plaintiffs have been in the classroom for a very long time, so we’re very patient people, and we are definitely in this for the long haul,” Friedrichs told reporters. “Today’s decision isn’t the end of the case, and in our view, it simply just delays the final outcome.”

Friedrichs’ case challenged the agency fees that public workers must pay to unions to fund collective bargaining negotiations. At the heart of the case is a question of whether those agency fees violate public employees’ First Amendment rights to free speech.

“This is not an anti-union case. This case is about protecting the individual rights that each of us are guaranteed in the Constitution, and that includes the right to not fund political positions with which we disagree,” Friedrichs said. “I am aware that some of my teacher colleagues agree with the union on issues that are political and collectively bargained, and I support their right to be part of the union.

“I just also believe that I deserve to have the freedom to choose, as do other public sector employees across the nation.”

The Supreme Court heard oral arguments in the Friedrichs case in January. Following the arguments, court observers speculated that the high court would rule 5-4 in favor of Friedrichs and her fellow teachers.

Comments previously made by Justice Antonin Scalia left many assuming he would cast the swing vote, but his questions during oral arguments suggested he would side with Friedrichs.

Scalia’s death last month cast doubt on the outcome of the case, as a 4-4 decision became more likely.

Following the justice’s passing, lawyers with the Center for Individual Rights, which along with lead counsel Michael Carvin of Jones Day is representing Friedrichs, urged the Supreme Court to hear the case again.

Terry Pell, president of the Center for Individual Rights, told The Daily Signal in February they would file a petition for rehearing in the event that the court is split in its decision.

Pell reiterated today that plan to do so.

“We obviously have a lot invested in the Friedrichs case,” Pell told reporters. “We think it raises the issue in a clear and clean way and allows the court to decide this issue on the merits. So we think it would be a lost opportunity if the court did not decide Friedrichs in an authoritative way, and that’s why we’re investing further effort to make sure the court has the opportunity to at least decide the case with all nine justices.”

A split decision from the high court leaves in place a 2014 ruling from the 9th U.S. Circuit Court of Appeals.

The lower court ruled against Friedrichs—which her lawyers asked them to do—in 2014, citing precedent set by the 1977 case Abood v. Detroit Board of Education.

In that case, the Supreme Court ruled that public-sector workers can opt out of paying full union dues but still have to pay agency fees to fund their “fair share” of collective bargaining arguments.

Because of the Abood case, Friedrichs’ legal team said the case can be decided only by the Supreme Court.

A decision in favor of Friedrichs from the Supreme Court would’ve delivered a blow to public-sector unions, as it would’ve effectively made union dues optional for all public employees.

Though the Supreme Court’s decision today allows public-sector unions in 23 states to continue collecting agency fees from public workers, Pell said that it is in the best interest of both unions and Friedrichs for the high court to rehear the case.

Pell said it’s not uncommon for the Supreme Court to rehear cases, particularly in the event that a justice leaves in the middle of a term. Landmark cases including Brown v. Board of Education and Roe v. Wade were reheard by the court, he said.

After Friedrichs’ legal team file the petition for rehearing, they expect the court to hold the petition until a new justice is confirmed.

Once that occurs, the nine justices will decide whether to rehear the case.

“The idea here is that there are a handful of cases that raise really fundamental issues of individual rights and that deeply divide the country, and this is one of those cases,” he said. “We’re talking about the laws in 23 states that would be struck down, and we’re talking about the free speech rights of tens of thousands of public employees.”