Chicago Teachers to Walk Out Again on 400,000 Schoolchildren 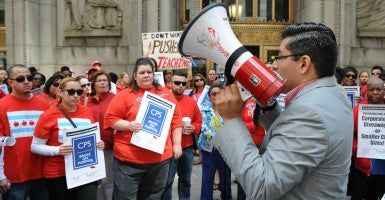 Chicago teachers voted to approve a one-day strike this Friday in protest of “unfair” labor practices, an action that affects about 400,000 public school students as schools plan to shut down for the day.

“As you may have heard, the Chicago Teachers Union (CTU) has declared a ‘Day of Action’ on April 1, 2016,” Forrest Claypool, CEO of the Chicago school system, and Janice K. Jackson, the district’s chief education officer, wrote in a letter to the families of students. They added:

While there are still unanswered questions about what this day will look like, we know that CTU leadership has proposed an illegal one-day strike, asking teachers to leave their classrooms empty and take to the streets. To explain this divisive action, CTU President Karen Lewis asked teachers and families to think of this one-day strike as ‘an extra holiday.’

“The CTU is using its power to hold the city’s schools hostage and is demanding policy changes that will do nothing to fix the deeply rooted inefficiencies in the school system,” Mary Clare Reim, a research associate in education at The Heritage Foundation, told The Daily Signal.

The teachers union said it demands a “fair contract” with the school system, including more revenue for the schools and students.

“Our kids should be at their desks in the classroom, and our teachers should be there giving them the essential education that they chose as a profession,” Chicago Mayor Rahm Emanuel, a Democrat, told reporters last week.

In July 2015, Emanuel appointed Claypool to head the public schools and Jackson as chief education officer.

According to the Illinois Policy Institute, a contract proposed by the Chicago school board “includes bans on teacher layoffs, caps on charter schools, and pay increases for teachers. The proposal also includes requiring teachers to pay more toward their own pension and health care costs.”

The latest action follows a contentious teacher strike by Chicago teachers in 2012, during Emanuel’s first term. The union first called for an April 1 classroom walkout over teacher pensions.

Not only do Chicagoans already pay more in taxes and fees than residents in any other major Illinois city, they’ve just been hit with a record property-tax and fee increase of more than $700 million annually.

Chicago teachers’ pension benefits have increased by 400 percent since 1987, according to the think tank.

In a contract offered in January, the district sought to phase out a 7-percent pension payment that the school district pays toward a teacher’s required 9-percent pension. The union did not accept the offer, the Chicago Tribune reported.

According to the union, the threat to cut payment gave the union legal grounds for a strike.

“Chicago spends almost $20,000 per student in the public school system, yet students’ academic achievements are subpar,” Heritage’s Reim said. “The city needs to get its fiscal house in order before artificially raising wages for teachers.”

Reim says teachers in Chicago are paid well above the national average for teachers and above the average household income in Chicago.

“Chicago teachers are already the nation’s highest-paid teachers when compared with teachers in the 10 largest school districts in the U.S.,” the Illinois Policy Institute’s Dabrowski wrote.

The Chicago school system has a $1.1 billion budget deficit, ABC News reported. The schools currently aren’t getting money from the state due to an unpassed budget.

Neither the school district nor the teachers union is “blameless,” the institute said in a press release,“but students are being forced to pay the price.” Furthermore:

In 2012, teachers walked out of the classroom for more than a week to demand unaffordable salary and benefit increases. Now, the [school system] budget is in worse shape, but CTU is exploiting the needs of students to demand even further concessions.

The school district put in place three unpaid “furlough” days (March 25, June 22, and June 23), on which teachers do not have to work, in an effort to save $30 million.

Some teachers, although not getting paid, planned to take students on an already scheduled field trip this past Friday, DNAinfo.com reported.

“All of these cuts, reductions, and actions by the mayor’s hand-picked Board of Education are punitive,” Lewis, the union’s president, said in a formal statement. “They do nothing to improve the quality of education we are able to offer more than 350,000 schoolchildren each day. These budget cuts, furloughs, layoffs, and a refusal to honor steps and lanes are all short-term fixes.”