Starting a Small Business Could Break This Federal Law 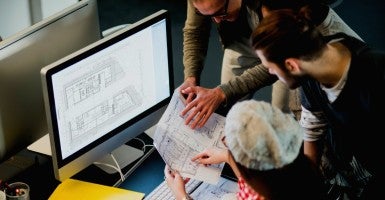 It’s estimated by the Securities and Exchange Commission that registration costs $2.5 million in legal, accounting, and other expenses.

Since the federal securities laws were first enacted in 1933, “transactions by an issuer not involving any public offering” have been exempt.

Thus, in principle, a few guys forming a small little business (a local restaurant or retail store) who are a little too public in seeking investors can run afoul of the securities laws. This wouldn’t be that hard to do—for example, one of them telling a local reporter about their plans when they run into him at the local high school football game could break the rules. Mentioning your plans on the internet could cause you serious legal problems.

In the hyper-litigious country we inhabit and given the potentially catastrophic impact that aggressive enforcement of the law would entail, it is appropriate to create a bright-line, per se safe harbor for very small offerings.

If you are raising a small amount of money from a few people most of whom you know already, you should not have to hire a securities lawyer, do a private placement offering memorandum, comply with Regulation D, and file a SEC Form D or otherwise risk being pursued by federal or state regulators—or, more likely, being successfully sued by disgruntled investors if the business fails or does not have the hoped for returns.

Small, and usually young, businesses are the source of most net job creation and much of the dynamism in the economy.

To reduce regulatory impediments to small business formation and growth, Congress should create a micro-offering exemption. It should create a safe harbor so that any offering (within a 12-month period)…

(1) to people with whom the issuer (or its officers, directors, or 10 percent or more shareholders) has a substantive pre-existing relationship;

(2) involving 35 or fewer other persons;

…is deemed not to involve a public offering.

The anti-fraud provisions of federal and state laws should remain fully applicable.

Rep. Thomas Emmer, R-Minn., has introduced legislation (H.R. 4850) that would create a micro-offering exemption along these lines.

This legislation would reduce the regulatory burden and legal risk imposed on small entrepreneurs by the securities laws and promote economic growth and job creation.