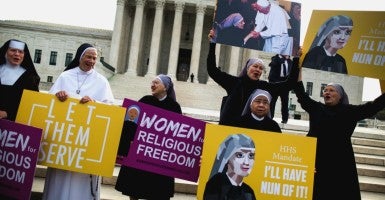 They were there to hear the U.S. government argue that the Little Sisters of the Poor must violate their faith and assist in providing contraceptive drugs and devices (including abortifacients) for all of their nuns and any other employees—through their health care plans. (Photo: Jim Lo Scalzo/EPA/Newscom)

The plaza of the U.S. Supreme Court and the courtroom itself were full of people you don’t normally see at the court—priests, ministers, and nuns of various religious orders.

They were there Wednesday to hear the U.S. government argue that the Little Sisters of the Poor—an order of Catholic nuns who have served the elderly and the poor for 175 years—must violate their faith and assist in providing contraceptive drugs and devices (including abortifacients) for all of their nuns and any other employees—through their health care plans.

In Little Sisters of the Poor Home for the Aged v. Burwell, the Little Sisters and several other religious nonprofits challenged Obamacare’s abortion/contraceptive mandate under the First Amendment and the Religious Freedom Restoration Act (RFRA).

Although the government has already exempted one in three Americans from the mandate, including the U.S. military and big corporations such as Pepsi, ExxonMobil, and Visa, it refuses to exempt religious nonprofits like the Little Sisters. Instead, such religious organizations must “self-certify” that they are religious employers and have religious objections.

That certification does not exempt them from the mandate; instead, it “shifts” responsibility for complying to either the religious employer’s insurer or, for a self-insured employer, the third-party administrator who processes the claims for the self-funded plan.

The religious objector will still end up ultimately paying for the abortion and contraceptive coverage either through the cost of insurance premiums (which reflect the experience of the insurer in paying health claims) or from the funds the employer provides to the third-party administrator to pay self-funded health claims.

The claim made by Solicitor General Donald Verrilli at today’s argument that the Little Sisters will not pay for the mandate is legal fiction to anyone with any experience in the health insurance industry. But even if the Little Sisters aren’t required to pay either directly or indirectly, the government will still be forcing them, against their religious beliefs, to open the floodgates that would allow the objectionable drugs to flow to their employees through their health plans.

Justice Sonia Sotomayor asked the first question, interrupting Paul Clement’s opening statement, with a question about individuals who were conscientious objectors to military service. She seemed to think that the government forcing employers to provide abortion/contraceptive coverage through a health plan is as important and compelling an interest as the government protecting the national security of the country in times of war.

Through their lawyer, Paul Clement, who was solicitor general during the George W. Bush administration, the Little Sisters made it clear today that they object to the government taking over their health care plan and forcing them to facilitate abortion/contraceptive coverage or “pay millions of dollars in penalties,” according to Clement. This regulatory scheme just forces them to violate their religion in a different way. In fact, this became quite a contentious issue during oral arguments, with Justice Anthony Kennedy at one point referring to the government “hijacking” the Little Sisters’ health plan, which Chief Justice Roberts said was “an accurate description of what the government wants to do,” making the Little Sisters “complicit” in what they consider a sin.

Clement, in the argument and in his reply brief, clarified that the nonprofits “do not object to objecting” and that they would be very happy to simply “opt out” and receive the same exemption as formal houses of worship, grandfathered health care plans, and big corporations. Clement aptly closed his argument by saying “my clients would love to be a conscientious objector, but the government insists that they be a conscientious collaborator.”

What is truly infuriating about this is that if the Little Sisters limited their services only to Catholics, instead of to all of the poor and the aged regardless of their religious affiliations, as they do, they would fit within the exemption provided to churches by the federal government based on an obscure, irrelevant provision of the tax code. Clement said this was irrational.

Both Justice Sonia Sotomayor and Justice Ruth Bader Ginsburg (and to a slightly lesser extent Justice Elena Kagan) displayed an almost overt hostility to the religious objections being raised. Although the case focused on the “substantial burden” being placed on the rights of the nuns to practice their religion, Sotomayor preferred to discuss the “burden placed on women” by not having easier access to such services.

Ginsburg similarly said that while no one in the case doubted the sincerity of the religious beliefs of the plaintiffs, the government had a “compelling” interest in providing abortion/contraceptive health care for women.

Noel Francisco, representing another group of religious organizations that object to the mandate, pointed out that the government had never met its burden of showing that forcing these organizations to maintain contracts that facilitate the objectionable coverage is the least restrictive means of providing contraception and abortifacients or that there is no alternative way to do it. He also asserted that the government had never explained why it granted so many exemptions to so many other groups and organizations yet could not grant an exemption to this type of religious institution.

While Verrilli said he also did not doubt the sincerity of the religious beliefs of the Little Sisters, he disagreed that the government’s alternative enforcement mechanism was a “substantial burden” on their religious freedom. He argued that none of the alternatives was sufficient, since they would require a woman to buy a separate policy to provide abortion/contraceptive coverage in a “jerry-rigged” system, as he termed it. He also made the unsupported claim that having different insurance policies would cause a woman with a reproductive issue to not be able to consult her regular doctor, ignoring the fact that most doctors accept health insurance payments from multiple insurance companies.

Verrilli argued that Congress’ objective was to provide seamless coverage, and it was too much of a burden to force a woman to fill out the paperwork to get insurance with her employer and a separate policy to cover just abortion/contraception services, or to get an entirely separate comprehensive policy. This raised a laugh in the courtroom when Justice Samuel Alito asked him whether that was because the health insurance “[e]xchanges are so unworkable, even with the help of a navigator[.]”

Roberts kept pushing Verrilli on this point, pursuing a line of questions that made it clear that the government was saying it was not okay to force an employee to do the paperwork to get such coverage, but it was okay to force the objecting employer to do so.

Verrilli said that current law wouldn’t allow the administration to let insurers offer an abortion/contraceptive-only policy on the exchanges. Roberts answered that by saying that “the way constitutional objections work is that you may have to change the law,” raising another laugh in the courtroom.

The questions by Justices Kagan, Ginsburg, Sotomayor, and Stephen Breyer were uniformly hostile to the religious freedom arguments being raised by the plaintiffs.

If this results in a 4-4 split decision, the rulings of the lower courts would remain in place. In the 8th Circuit Court of Appeals, for example, the court ruled in favor of a challenge to the contraceptive/abortion mandate and disagreed with the 10th Circuit, which ruled against the Little Sisters. Alternatively, the justices could decide to hold the case over until a ninth justice is appointed who could break the tie.

One final note: As we walked out of the Supreme Court after the arguments, there were protesters waving signs on both sides of the case, one side yelling and the other singing hymns. The protesters in favor of the government’s position were holding signs saying that their contraceptive choices were none of their “bosses’ business”—a strange claim to be made by protesters, who, from their clothing, were obviously not nuns. And if it is none of their bosses’ business, then why is the government forcing their bosses to pay for it?