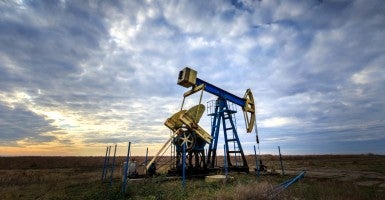 Fracking has safely provided a much needed boon to the American economy. (Photo: istockphoto)

Andrew Wilford is a member of the Young Leaders Program at The Heritage Foundation.

Some politicians and environmental activists have been quick to call for blanket bans on hydraulic fracturing under claims that the process is poisoning America’s drinking water. Scientific evidence, from both government agencies and independent analyses, proves otherwise.

For instance, The Environmental Protection Agency’s last study, released in June of 2015 and the most comprehensive government study on fracking’s impact so far, clearly states that “we did not find evidence … [of] widespread, systemic impacts on drinking water resources in the United States.”

The EPA’s analysis is hardly the first study to refute the oft-repeated myth that fracking poses a serious threat to American drinking water. In 2009, the Department of Energy conducted a report that declared fracking “safe and effective.” In 2014, the Department of Energy released another study of the Marcellus Shale that found no evidence of fracking contaminating water supplies.

Again in 2014, the National Academy of Sciences released a a report finding that the contamination of water resources in Pennsylvania and Texas were attributable to well leaks, not hydraulic fracturing.

Groundwater aquifers sit thousands of feet above the level at which fracking takes place, and energy companies construct wells with steel-surface casings and cement barriers to prevent gas migration If any leaks or contamination does occur, companies should pay for the economic and environmental damages they cause from such well leaks. But these leaks are not a systemic problem of the industry, much less something that causes widespread polluted water.

Such statements by progressives and environmental activists, manifestly in conflict with actual experience and the science of the issue, pose a serious threat to the vast economic benefits of fracking. Scholars of all stripes agree that fracking is excellent for the economy, providing Americans with jobs, communities near fracking wells with economic booms, and U.S. households with significant energy savings. According a recent Energy Information Administration report:

Wholesale electricity prices at major trading hubs on a monthly average basis for on-peak hours were down 27 to 37 percent across the nation in 2015 compared with 2014, driven largely by lower natural gas prices.

Prices at the pump are down significantly, too, allowing American families to keep more of their money to use for other purposes. The current average price of regular gasoline is less than $2 per gallon. Many factors contribute to the price of gas, but domestic supply is a key component.

We save money not only through lower energy bills and cheaper gasoline, but through cheaper goods and services, because energy is a necessary component for just about all we do. Lower gas prices also reduce input and transportation costs for businesses around the country, savings that are also passed on to consumers through reduced prices in other sectors of the economy.

Moreover, hydraulic fracturing benefits low-income families most of all, which is why the Wall Street Journal termed fracking “America’s best antipoverty program.” Such an energy revolution should be embraced, not rejected out of hand.

Anti-fracking rhetoric not only conflicts with experience and science, but ignores the effective state-based regulatory system in place. The process has been regulated successfully at the state level for decades.

States have the most to gain when they permits fracking to take place, but also the most to lose if the process is done irresponsibly. The states’ effective regulation underscores the need for members of Congress to prevent duplicative federal intervention that would unnecessarily stall the oil and gas boom and drive up costs for producers and therefore consumers.

Fracking has safely provided a much needed boon to the American economy. Attacking it with unfounded rhetoric is an assault not just on the industry itself, but on American businesses and families who benefit from the influx of domestic natural gas and oil fracking companies supply. Congress should resist the demands of the environmental lobby and put more authority in the hands of the states, not less.