Self-Sufficiency, Not Government Spending, Should Be the Measure of Antipoverty Progress 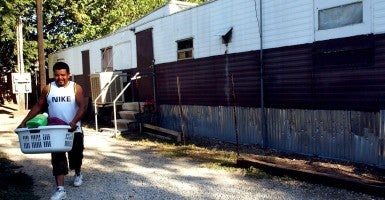 This week President Barack Obama’s Department of Health and Human Services reached the startling conclusion that if massive welfare programs such as food stamps and the refundable earned income credit are counted as income, poverty is reduced.

Not even incompetent government bureaucracies can spend a trillion dollars per year and have no effect on living standards.

This should be no surprise. Government currently spends over $1 trillion on means-tested welfare aid annually, providing cash, food, housing, medical care, and social services to low-income Americans. That comes to around $20,000 for each American living in official poverty. Not even incompetent government bureaucracies can spend a trillion dollars per year and have no effect on living standards.

The federal government still insists that each year, nearly 50 million Americans live in poverty. But “poverty” as measured by the government has little relationship with any ordinary sense of the word; the actual living standards of the poor differ greatly from conventional perceptions. The government’s own data show that the typical poor family in the U.S. has air conditioning, a car, and cable or satellite TV.

Half of the poor have computers; 43 percent have internet, and 40 percent have a wide-screen plasma on LCD TV. The U.S. Department of Agriculture reports that only four percent of poor children were hungry for even a single day in the prior year due to lack of funds for food. Only 6 percent of poor households are over-crowded.

The average poor American has more living space than the average, non-poor individual living in Sweden, France, Germany, or the United Kingdom.

Do these living standards mean the War on Poverty was a success? Not at all.

Do these living standards mean the War on Poverty was a success? Not at all.

The real goal of President Lyndon Johnson in launching the War on Poverty in the mid-1960s was not to artificially prop up living standards with ever higher levels of welfare spending. The true goal of the War on Poverty was to make Americans “self-sufficient,” able to support themselves above poverty without the need for welfare aid.

But a few years after the War on Poverty began, this progress came to a grinding halt. For nearly a half-century, there has been no improvement in self-sufficiency at all. During that time, welfare spending has cost taxpayers over $23 trillion; in reality, the War on Poverty has been a remarkably expensive flop.

HHS and national policymakers need to focus on expanding Americans’ self-sufficiency, not enlarging the government welfare programs, as the measure of success.