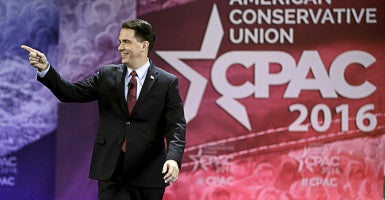 "The conservative movement is alive and well in states all across America," Gov. Scott Walker said Thursday. (Photo: Gary Cameron/Reuters/Newscom)

Wisconsin Gov. Scott Walker, a Republican, said Thursday that President Barack Obama has helped the conservative movement expand during the past seven years.

Since Obama took office in 2009, Walker noted, the number of Democratic governors across the United States has fallen from 28 to 18.

“The only nice thing I can say about this president is he’s been an incredible recruiter for conservative candidates,” Walker said during the 2016 Conservative Political Action Conference, or CPAC, at Maryland’s National Harbor near Washington, D.C.

He cited Matt Bevin’s unlikely win in Kentucky’s gubernatorial race in November as evidence that the grassroots conservative movement has gained momentum under the Obama administration.

Bevin’s defeat of Jack Conway, Kentucky’s former Democratic attorney general, made him the state’s third Republican governor since World War II and one of 31 GOP governors who currently hold office across the United States.

“The reason why we see that kind of change is because Americans are looking for leadership that counters the failed policies of Barack Obama,” Walker said.

Walker noted that 27 state legislatures were controlled entirely by Democrats when Obama took office, and eight were evenly split between the parties.

“The conservative movement is alive and well in states all across America,” Walker said. “Why? Because our policies are working.”

The Wisconsin governor pointed to Indiana Gov. Mike Pence’s success in bringing the unemployment rate down to the lowest it has been since March 2011. South Carolina Gov. Nikki Haley, meanwhile, has added 30,000 state residents to the workforce who previously were on welfare.

Running through Saturday, CPAC offers conservatives across the country an opportunity to gather with fellow activists and leaders for speeches, panels, exhibits, and other activities at Gaylord National Resort and Convention Center, just outside Washington, D.C.