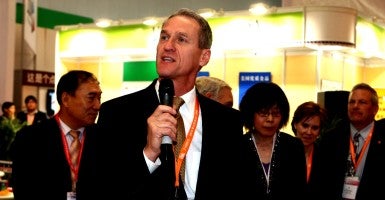 The South Dakota legislature gave the entire United States an example of principled leadership on how to defuse controversy and craft public policy that creates good outcomes for everyone. (Photo: RajWong/FEATURECHINA/Newscom)

South Dakota Governor Dennis Daugaard, a Republican, officially has no problem with boys in girls’ locker rooms. There’s no other way to say it. Special interests and big businesses effectively lobbied the governor to veto a good bill because of the threats they made. Welcome to cultural cronyism at the bathroom.

Welcome to cultural cronyism at the bathroom.

Yesterday Daugaard caved to those lobbyists and vetoed a bill (H.B. 1008) that passed with overwhelming support from both chambers of the state legislature. The bill would have prevented biological males who identify as girls from using girls’ restrooms or locker rooms in public schools, but it also would have required local school officials to make reasonable accommodations for such students.

Instead of a winner-take-all approach favored by the left, the bill created a win-win outcome for everyone. It protected the privacy and safety of all students, and it created new accommodations for transgender students.

Men and women have bodily differences, and that’s why we have men’s rooms and ladies’ rooms. It’s not about gender identity, but biology—and protecting privacy related to our bodies.

>>>For More on This, See Ryan T. Anderson’s New Book, “The Future of Marriage and Religious Freedom.”

So the South Dakota bill continued the bathroom policy we’ve always had in America while also creating obligations for local schools to find reasonable accommodations for transgender students—biological males who identity as females and biological females who identify as males.

But LGBT activists attacked the state. And big businesses threatened boycotts. South Dakota was being accused of “transphobia” for reaching this commonsense compromise. As the bill reached the governor’s desk for his consideration, the head of the Human Rights Campaign warned that “history will not treat kindly those who support this discriminatory measure.”

The official policy of LGBT activists is that boys who identify as girls should have unfettered access to girls’ bathrooms, locker rooms, and shower facilities. They believe that anything less than full access to the bathroom and locker room of their choice is transphobic, a denial of civil rights and equality.

This is an extreme position, out of step with the majority of Americans, and utterly inconsiderate of the concerns of the non-transgendered community. And Daugaard gave in to it.

The bill respected local control while ruling out one, and only one, bad option: boys in girls’ locker rooms and bathrooms.

Remarkably, the governor justified his veto by claiming that the bill would undermine local control and “impose statewide standards.” Nothing could be farther from the truth. The bill respected local control while ruling out one, and only one, bad option: boys in girls’ locker rooms and bathrooms.

If this bill undermined local control, it can only be because Daugaard thinks local schools should be able to allow boys in girls’ bathrooms. Or, to put it another way, he thinks local schools should be able to require girls to undress in front of, or be exposed to, boys who identify as girls in showers and locker rooms as a condition of going to school.

Daugaard claimed that the bill “removes the ability of local school districts to determine the most appropriate accommodations for their individual students and replaces that flexibility with a state mandate.” Again, though, this is false.

The bill specifically required local schools to find reasonable accommodations for transgender students. The bill mentioned three examples of reasonable accommodations explicitly—single-occupancy restrooms, unisex facilities, and faculty locker rooms—and it left lots of room for teachers and principals to work out tailored solutions that would be sensitive to everyone’s interests.

In closing his veto statement, the governor claimed that the bill would expose local school districts to lawsuits from transgender students “in an area where no such liability exists today.” Again, the governor is wrong. If a school creates any reasonable accommodation short of full and unfettered access to the bathroom of one’s choice, those lawsuits will come. And now local schools won’t even be able to point to the state law in their defense.

The nation is primed for yet another clash in the culture war—this time over school bathroom policy. The South Dakota legislature gave the entire United States an example of principled leadership on how to defuse controversy and craft public policy that creates good outcomes for everyone.

Daugaard likewise had an opportunity to show courage and do the right thing by signing the bill. He could have stood up to the special interest lobbyists and the cultural cronyism of big business, but he caved. He could have protected the rights and interests of all children in South Dakota. Instead, he said he’s fine with boys in girls’ locker rooms.