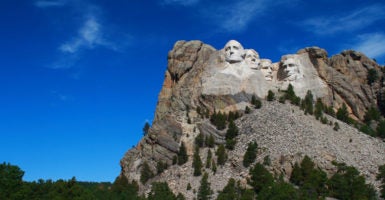 South Dakota Republicans on both Capitol Hill and at the Supreme Court want local online retailers to be allowed to collect state sales taxes from out-of-state customers. (Photo: khyim/Getty Images)

In two different battlegrounds, South Dakota Republicans are leading the charge to increase the ability of tax collectors to reach out and collect revenue from anyone in the U.S.

Twenty-five years ago, in Quill v. North Dakota, the Supreme Court threw out exactly this sort of tax scheme, ruling that a state cannot require a business to collect sales taxes for it unless the business has a physical presence—such as a building, warehouse, or employees—in that state.

This fundamental principle of physical presence limits the reach of revenue hungry tax collectors in all 50 states. It keeps California or Illinois from forcing local businesses elsewhere to collect their taxes. The protections of Quill are under fire in the courts and in Congress.

Ever since the protections in Quill were decided, efforts have been underway to get the court—or Congress—to overturn precedent. And they may get their way later this year, when the Supreme Court will rule on a case that challenges Quill. The case was argued earlier this week by South Dakota Attorney General Marty Jackley.

>>> Here are the key exchanges from oral argument.

Quill is also once again being challenged on Capitol Hill by another South Dakotan, Kristi Noem, the state’s lone representative in the House. Her bill to expand the power of state tax collectors is based on the premise that the physical presence standard deprives states of needed revenue. It also pleases local retailers, who have long asked for protection from out-of-state online retailers.

The retailers’ complaints are not entirely baseless. Under Quill, an internet retailer selling remotely to consumers in another state might not be required to collect sales tax, while brick-and-mortar retailers selling the same products are.

But the disparity is not as big as the political rhetoric makes it out to be. Most large retailers such as Amazon already collect taxes in every state. An expansion of sales tax collections would only affect smaller businesses. These are the firms least likely to be able to deal with the burden of collecting the proper taxes for some 10,000 jurisdictions and 46 state tax authorities, each with its own tax rates.

If states wish to impose costs on retailers within their borders, they should be able to do so. But retailers should not be subject to mandates from states with which they have no physical connection, and whose policymakers face no accountability for the costs they impose.

If local officials want to treat all sales in their state equally, they are currently able to impose taxes on sales that originate from all businesses located within their borders. Internet vendors would be taxed on an equal footing with brick-and-mortar retailers—at the “origin of sale.”

Unlike the current proposals to overturn Quill, an equally applied tax on all sales shipped from South Dakota would not require the law to change, would protect American citizens from taxation without representation, and would treat similarly located businesses the same.

The Supreme Court got it right 25 years ago. There is still no good reason to expand the reach of state taxes beyond their borders. While seeming to level the retail tax playing field, it would instead create new burdens, while undermining government accountability.