How Oregon’s $14.50 Minimum Wage Will Hurt Those It’s Supposed to Help 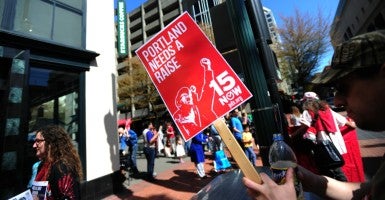 Good intentions can produce terrible results. Recently the Oregon legislature passed an unprecedented minimum wage hike in effort to help workers within their state, but the legislation will hurt the workers it’s supposed to help.

Economists examining the 2007-2009 federal minimum wage hike found that affected workers’ weekly earnings dropped by an average of $150 month. This is because while some workers got higher pay, others lost their jobs—or could not find work to begin with.

So whose jobs will the Oregon minimum wage hike put at risk? Predominantly restaurant workers and cashiers, along with some personal service workers. What many advocates miss is that many employers cannot afford these higher wages. The average restaurant has a profit margin of around 4-5 percent. Simply raising wages would completely eliminate most restaurateurs’ profits—and then some. They will have no choice but to raise prices. That in turn will drive away customers, reducing the number of employees needed.

The Oregon legislature can force businesses to pay their employees higher wages. But it cannot force them to hire those employees in the first place.

Businesses will also respond by looking for new ways to automate labor. This will prove particularly straightforward for cashier jobs. Businesses from supermarkets to fast food chains have all implemented some form of automatic checkout. Over the next six years, Portland businesses will adopt this technology much more extensively than they would have otherwise.

The Oregon legislature can force businesses to pay their employees higher wages. But it cannot force them to hire those employees in the first place. This is a lesson many Oregon workers will soon painfully learn.