Next President, Not Obama, Should Pick Scalia’s Successor 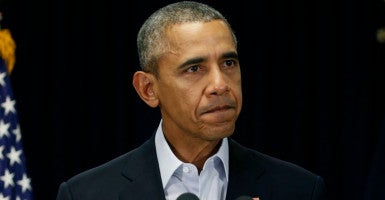 In the last 80 years no Supreme Court nominee has been both nominated and confirmed in an election year vacancy. (Photo: Kevin LaMarque/Reuters/Newscom)

The unfortunate passing of Supreme Court Justice Antonin Scalia has opened a vacancy on our nation’s highest court. Whoever fills that vacancy, the American people deserve a nominee chosen by the next president, not by an administration with one foot out the door.

The Constitution is very clear that the president has the power to nominate new members of the Supreme Court, “with the Advice and Consent of the Senate.” There is broad agreement among constitutional scholars that our elected representatives in Congress can say “no” if they choose. They don’t have to rubber-stamp new judges.

As John O. McGinnis, the George C. Dix professor in constitutional law at Northwestern University School of Law, wrote in the Heritage Guide to the Constitution:

The Senate has independent authority in that it may constitutionally refuse to confirm a nominee for any reason. While ideology and jurisprudential “point of view” were not among the kinds of concerns listed by the Framers as justifying the requirement of advice and consent, nothing in the text of the clause appears to limit the kind of considerations the Senate can take up. […] As the president has complete discretion in the use of his veto power, the Senate has complete and final discretion in whether to accept or approve a nomination.

There are a lot of good reasons to say no, and it’s been done many times in the past: If the nominee in question doesn’t have much experience, if he’s allowed politics to influence his past decisions as a judge, or if he’s demonstrated that he thinks the Constitution is malleable and should be interpreted to reflect his personal ideology.

In this case, there’s another good reason: Anyone nominated by President Barack Obama will represent an administration on its way out the door. He or she will be put in a lifetime job, possibly for decades, by a president with only a few months left to govern. It would be far better to wait until the Americans elect a new president to consider such an important replacement.

Less than two years ago, Americans upended control of the Senate as a rejection of Obama’s policies. It is unthinkable that this same Senate would use that mandate to give a lifetime appointment to another Obama justice.

It’s not just conservatives who think waiting is a good idea. In 2007, Sen. Chuck Schumer. D-N.Y., advocated blocking any Supreme Court nominations by President George W. Bush, who had more than a year and a half left in his term—much more time than Obama has now.

Less than two years ago, Americans upended control of the Senate as a rejection of Obama’s policies. It is unthinkable that this same Senate would use that mandate to give a lifetime appointment to another Obama justice.

Furthermore, in the last 80 years, no Supreme Court nominee has been both nominated and confirmed in an election-year vacancy. The only time there was a confirmation in an election year was in 1988 for Justice Anthony Kennedy, but that vacancy occurred in 1987, and Kennedy was just a replacement for Robert Bork, an eminently qualified jurist who had been blocked by Senate liberals for months prior and ultimately denied confirmation.

The media pressure to consider Obama’s nominee, whoever he or she might be, will be immense. But the pressure on the Senate to do right by their constituents, the American people, must be even more so.

Fortunately, Majority Leader Sen. Mitch McConnell, R-Ky., has said that “this vacancy should not be filled until we have a new president.” If Senate leadership is serious about allowing time for democracy to do its work, there’s no reason a nomination should even make it to the Judiciary Committee: It needn’t make its way out of the Senate clerk’s office.

It is sad that our tributes to the life and wisdom of Scalia should give way to political debates, but these discussions are necessary if his successor is to continue his legacy of respect for the Constitution.

The American people deserve a Supreme Court justice who reflects their convictions, and not those of a lame duck president whose administration has so flagrantly disregarded our Constitution and disappointed many millions of Americans.

The Senate can and should withhold its consent—as it has every right to do—until the people have chosen a new leader for our country.