This Mom Wanted Voters to Pay Attention to an Election. Instead, She Got Sued. 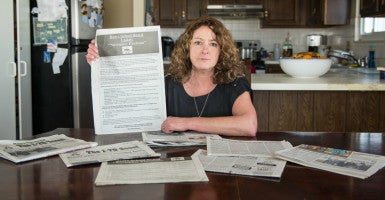 "I was mad because I had placed the ad as an informative ad, but our local newspaper called it a political ad," Tammy Holland says. (Photo: Institute for Justice)

A Colorado mother got caught in a legal battle after buying two ads in a local newspaper to encourage voters to brush up on the candidates running for school board.

Terry Holland says she wanted to make other parents aware of their options because no one had run against an incumbent in the previous election. To spread the word, she placed the ads, listing the names of candidates without advocating for or against any one contender.

What happened next, she says, is that school system officials used Colorado’s campaign finance system to sue her on two counts of violating the law in what she says was an attempt to silence her for the remainder of the election in the Byers School District.

“When it first happened, I was scared that I did something wrong, and I was mad because I had placed the ad as an informative ad, but our local newspaper called it a political ad,” Holland told The Daily Signal.

School board members accused Holland of skirting disclosure laws, claiming that because she spent more than $200 on the ads, she should have registered with the government as a political action committee.

The officials also claimed that Holland violated federal campaign finance law because neither ad included a disclaimer indicating who had paid for them.

In most states, the secretary of state or a specialized agency decides whether to pursue an apparent campaign finance violation, Paul Sherman, senior attorney for the Institute for Justice, told The Daily Signal. But in Colorado, the state constitution mandates that the case be sent to an administrative court, jumping straight to “full-blown litigation.”

“Colorado’s campaign finance laws lack virtually all of the safeguards that are present in every other state to weed out frivolous or abusive complaints,” Sherman said, adding:

In many cases, if it’s a minor violation like paperwork being filed late or forms filled out incorrectly, they’ll just call you up and say, ‘Hey, you need to fix this.’ But in Colorado, all of that process is cut out.

Holland, whose son is in fifth grade, said she became active in school board meetings last September to speak out against the Byers School District’s implementation of the Common Core national education standards.

She said Superintendent Tom Turrell began employing “intimidation tactics” to deter her from attending board meetings.

After Holland spent roughly $975 in September to place the two ads in the local newspaper, The I-70 Scout, Turrell filed the disclosure complaint.

Turrell told The Daily Signal he had been “inundated” with calls from people who believed that the school district had placed the ads because the ads didn’t disclose who had paid for them.

Since the ads quoted school policy (one was headlined “Byers School Board Update: November Elections”) and were run during an election campaign, Turrell said, he decided to file the complaint.

But Turrell withdrew the suit after meeting with the Colorado School Board Association, which decided that because of his position as superintendent, residents might speculate he was involved in politics on school time.

Byers School District board member Tom Thompson then filed the complaint in his name but called the state’s campaign finance system “misleading and convoluted.”

Sherman, the Institute for Justice lawyer, said because the private enforcement system in Colorado lacks government oversight to review spurious complaints, the law encourages politicians to “retaliate” against anyone who opposes them.

“What happened here is that the government has outsourced the enforcement of its campaign finance laws to every politico with a grudge, and that just violates the First Amendment,” he said.

If this had happened in another state, where a prosecutor or lawyer first must screen a case before it moves to litigation, Sherman said, the case would have been thrown out quickly. He said:

Federal campaign finance law is totally inapplicable to local school board elections; it only applies to federal elections. Even Colorado’s similar disclaimer law wouldn’t have applied to Tammy’s ads because, again, she didn’t call for the defeat or election of any candidate.

The lawsuits have cost Holland $3,500 in legal expenses, she says. Although she has received broad support across the state, she says, she also has felt alone in her own community.