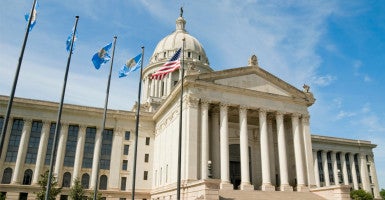 Just days before the Oklahoma legislature kicked off this year’s session, three law enforcement groups began lobbying lawmakers to oppose a bill that would make it more difficult for police to take property from innocent Americans under the state’s civil asset forfeiture laws.

Loveless’ bill, they warned, would lead to a decrease in money needed for drug enforcement efforts and, in turn, lead to more drugs in Oklahoma communities.

“The proposed legislation will encourage cartels and street gangs to increase operations in Oklahoma,” a letter from the Oklahoma Association of Chiefs of Police to lawmakers said. “It will result in even more drugs in our communities and even more lives and families being destroyed by them.”

In recent years, though, law enforcement’s abuse of civil forfeiture has been widely covered as reports surfaced involving innocent Americans who had property seized yet were never charged with a crime.

Opponents of civil forfeiture say the rise in the use of forfeiture could be tied to tight budget constraints, as police and prosecutors use the procedure to supplement normal operating budgets.

“I think that the opposition in general comes from a desire on the part of law enforcement in Oklahoma to defend their cash cow,” Jason Snead, a policy expert at The Heritage Foundation, told The Daily Signal. “They make millions of dollars off of civil forfeiture, and even a slight tinkering in terms of raising standards of proof or requiring a criminal conviction, or, heaven forbid, transferring seized assets to the control of the legislature or third-party board, would disrupt that funding mechanism.”

Brad Cates, who ran the Justice Department’s Asset Forfeiture Office during President Ronald Reagan’s administration, said law enforcement’s current use of forfeiture fails to uphold the rights granted to Americans in the Constitution.

“The process just isn’t the American way to do it, and we all want to stop crime. I hate criminals,” Cates told The Daily Signal. “I spent most of my life fighting them, but we have a proper way to deal with it.”

“In Oklahoma City, all of the forfeiture proceeds are used for law enforcement purposes such as training and equipment,” William Citty, chief of police for the Oklahoma City Police Department, wrote in a letter to legislators. “Without forfeiture funds, the department’s ability to deter drug-related crime would be significantly impacted and criminals would be allowed to use the illegally gained funds to continue their criminal activities.”

Both the Oklahoma Association of Chiefs of Police and Oklahoma Sheriffs’ Association said in their letters that current state civil asset forfeiture laws provide “layers of safeguards to protect citizens’ rights” and stressed that property owners have a right to a jury trial and are “never” required to prove their innocence when appearing in court to fight for their property.

But Snead said it’s not quite that simple, as most people need to hire an attorney to win property back that was seized by law enforcement.

“As we see in practice, the rights guaranteed on paper are very difficult in the real world to actually execute,” he said.

Cases like one involving a Creek County, Okla., couple only further arguments for why civil forfeiture laws need to be reformed, advocates say.

In March 2012, Linda Goss and her husband had their house raided by Creek County Sheriff’s deputies, who arrested them for allegedly having illegal drugs in their home. Police then seized firearms, a fishing boat, and a truck, according to Oklahoma’s News on 6.

The couple spent three days in jail but later learned that law enforcement had raided the wrong home.

Though charges against the Gosses were dropped, they couldn’t pay the impound fee for the truck, which they lost. The couple got the boat back, but they said it was damaged.

Mark Woodward, spokesman for the Oklahoma Bureau of Narcotics, told The Daily Signal that there are relatively few stories of innocent Americans like the Gosses who have property seized.

“There are thousands of seizures that take place in Oklahoma and around the country, and the people who want to talk about the need for reforms talk about a handful of cases—maybe 10,” he told The Daily Signal. “When you talk about the thousands of seizures that take place and you have 5 to 10 stories that are used as anecdotes of an issue, that tells us that by and large, the system is working well.”

Woodward said the bulk of seizures from his agency involve drugs, not money, and pushed back on the argument that law enforcement use civil forfeiture to pad their budgets.

“We get a lot more drug seizures on the highway than we ever do money,” he said. “Often times, we can take the drugs, make the arrests, and follow up and take down entire organizations. We don’t want the public to think this is all money-driven.”

“Forfeiture is often portrayed as the last bulwark against criminality or international drug gangs, but the fact of the matter is, every single seizure that we’re talking about is clearly not a justifiable seizure,” Snead said.

“If you reform forfeiture laws to enhance due process protections for citizens, the property seizures we’re trying to stop are the unjust ones, not the justifiable seizures,” he continued. “Raising the evidentiary standards, requiring a criminal conviction, that sort of thing—it will not lead to an inability on the part of the criminal justice system to punish criminal activity.”

Cates criticized law enforcement groups for failing to recognize the cases where innocent Americans are left to fight for their belongings, despite the fact they never committed a crime.

“They seem to be missing the main point, which is that you can’t just take things from people without convicting them of a crime, and they’re kind of letting the tail wag the dog,” he said. “They talk about many cases where they find money and drugs, and it’s all wrapped up together, and it looks like it was involved in a criminal activity, but they don’t talk about thousands of other cases where citizens get their stuff taken and there’s no real recourse to get it back.”

Loveless’ bill required prosecutors to secure a conviction before law enforcement could move to forfeit cash, cars, or property seized by police. The legislation also directed all forfeiture proceeds to the state’s general fund, a provision that civil forfeiture opponents said eliminated the profit incentive they believe the tool creates.

Though it’s Loveless’ original bill that law enforcement groups are opposing, the state senator introduced a new version that he hopes will gain traction in the state legislature.

The new proposal would direct forfeiture proceeds to a fund governed by a 15-person board made up of eight citizens and seven members of the law enforcement community. Using the proceeds from forfeiture cash and property, the board would award grants to drug treatment centers, drug courts, and law enforcement for drug interdiction efforts.

Despite the changes to Loveless’ bill, law enforcement groups argue that the original legislation would cause them to make “difficult choices on how to make up the difference in their budget.”

“Proposed legislation by Senator Kyle Loveless, if enacted, will virtually eliminate sheriff’s assets and ability to combat drug dealers and cartels at the county level,” the Oklahoma Sheriffs’ Association said in a letter to state lawmakers. “Without existing Oklahoma forfeiture laws, sheriffs do not have sufficient funds to continue active enforcement at the current level.”