Homeless Man in Viral Chick-fil-A Photo Has a Dream. Strangers May Help Him Achieve It. 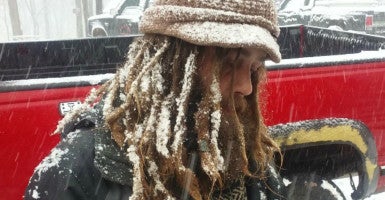 “I’m a Christian myself and I felt compelled to help him,” Amanda Mills, who began the fund raising, says of Justin Burkeen. (Photo: Justin Burkeen Facebook)

A crowdfunding campaign is raising money to help a homeless man pay for a food truck for the hungry, after tens of thousands learned of his plight in a viral photo taken at a Chick-fil-A restaurant.

The fundraising effort “exists to help him fulfill his dream,” Joey Mustain said on Facebook. “Let’s not just help him get on his feet; let’s help him stay on his feet.”

As previously reported by The Daily Signal, Mustain wrote a Facebook post describing an act of Christian charity he witnessed toward the homeless man by a manager at a Chick-fil-A.

Mustain said the man requested scraps, but the manager offered him a full meal with the only condition being they pray together. The post, which has been shared over 120,000 times as of Feb. 1, is illustrated with a photo of the two men bowing their heads.

The new page on the GoFundMe site identifies the homeless man as Justin Burkeen and says he “has lived a rough life that eventually led to him being homeless just over 10 years ago.”

The campaign’s sole purpose is to “help fund a food truck that would present an opportunity to travel around the country feeding those who are much like Justin and to spread a little more hope where hope itself seems hopeless.” The crowdfunding page adds:

Mr. Burkeen has prayed about the direction his life should go and he never thought that seeking out a meal to fill his physical hunger would also provide the spiritual fulfillment he has longed for all along.

Amanda Mills told The Daily Signal she started the GoFundMe account after seeing Mustain’s viral post online. Having previously been homeless herself, Mills said, she reached out to Burkeen via Facebook because “I felt his pain—not knowing where you’re heading or where you are going to be sleeping.”

“I’m a Christian myself and I felt compelled to help him,” Mills, a resident of Louisville, Ky., who works at a homeless health clinic, said.

Mills said the homeless have a great need for mobile meal trucks, especially in the winter months, since some of them camp outside when shelters are full. She said limited hours at soup kitchens can leave many hungry.

The money raised will help pay for repairing the transmission of a bus Burkeen already owns, the crowdfunding page says. Any leftover money will go toward food and supplies.

The page requests that those who cannot give financially keep Burkeen in their prayers.

The hope is to maintain Burkeen’s bus as a food truck with donations and grants, Mills said. She plans to work out details with Mustain and Burkeen over the next few weeks.

“The key right now is to get him up and started,” she told The Daily Signal.

“I’m looking forward to meeting [Burkeen] and Joey. It’s definitely been a humbling experience,” she added.