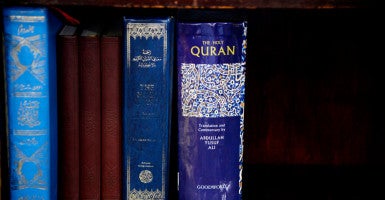 “Teachers of Islam are doing things that would never be tolerated for other religions," lawyer Richard Thompson says. (Photo: Douliery Olivier/Abaca USA/Newscom)

A Maryland couple are suing their county school system, the school board, and their daughter’s high school principal over what they claim was “Islamic indoctrination and propaganda” in a world history class.

John Kevin Wood and his wife, Melissa, say they are Christians and were upset to learn their 16-year-old daughter brought home homework that characterized Muslims as having “stronger” faith than Christians.

As The Daily Signal previously reported, the Woods also took issue with the assertion that “Islam, at heart, is a peaceful religion.”

They say their daughter was forced to write out and say the Shahada, the Islamic profession of faith: “There is no god but Allah, and Muhammad is the messenger of Allah.”

“The Wood family’s case is important, and indicative of developments throughout the country where schools are teaching Islam in ways that are denigrating to other religions,” Richard Thompson, president and chief counsel of the Thomas More Law Center, told The Daily Signal.

Wood is a former Marine and firefighter who fought and lost comrades in Operations Desert Shield and Desert Storm and responded to the Sept. 11, 2001, terrorist attack on the Pentagon.

In October 2014, Wood was angered when he saw the world history homework that read, in part, “Most Muslim’s [sic] faith is stronger than the average Christian.”

He said he told La Plata High officials he planned to pursue “lawyers and the media” if the school continued to “retaliate against” his daughter “for her adherence to her Christian faith.”

In response, he said, the school’s vice principal barred Wood from setting foot on school property.

It’s not that simple, says Andrew Kloster, a legal fellow in the Edwin Meese III Center for Legal and Judicial Studies at The Heritage Foundation. Kloster said in an email:

If you look at the school materials, it is sometimes unclear if the student is being asked to fill in statements related to how Muslims view themselves (this would be unobjectionable), or whether the statements are considered ‘objective’ (which would be factually wrong, but within the right of a school board in terms of setting curriculum), or whether the student is being asked to personally endorse the statements.

Ultimately, whatever the legal result, the tone of the worksheet is extremely problematic and smacks of political correctness and Islamic theology. To avoid lawsuits and bad publicity like this, schools should generally have policies in place to accommodate reasonable requests by religious students—it would take only a few minutes to come up with alternative questions that are more sensitive and less biased.

Thompson said Thomas More Law Center will file a preliminary injunction for the ban against Wood’s visiting the school within the next two weeks so that he may attend his daughter’s graduation.

La Plata High School and Morris, the vice principal, did not respond to requests for comment.