Should Courts Be Able to Make Legislative Judgments on Abortion? 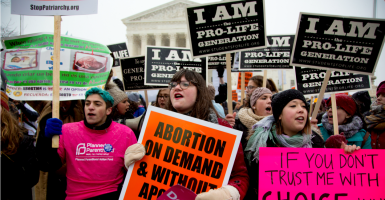 The scene outside the Supreme Court during the 43rd "March for Life" on Friday, Jan. 22. (Photo: Jeff Malet Photography/Newscom)

Recently, the U.S. Court of Appeals for the 7th Circuit, in a case very similar to another one pending before the Supreme Court, issued an opinion blocking the enforcement of a commonsense abortion regulation in Wisconsin.

The Wisconsin law, which was passed in 2013, requires abortion providers to have “admitting privileges” at hospitals within 30 miles of their abortion facilities. The legislature passed this measure to promote the safety of women seeking abortions.

Oddly enough (for an organization claiming concern with women’s health), Planned Parenthood of Wisconsin sued the state, claiming that this law would make it harder for women in Wisconsin to obtain abortions and thus would violate Planned Parenthood of Southeastern Pennsylvania v. Casey, the 1992 Supreme Court case that articulates standards for regulating abortion.

In Casey, the Court held that prior to viability, in order to pass constitutional muster, an abortion regulation may not impose an “undue burden” on a woman’s right to an abortion—that is, the regulation cannot have “the purpose or effect of placing a substantial burden in the path of a woman seeking an abortion[.]”

The Supreme Court later clarified in Gonzales v. Carhart, in which the Court upheld the federal Partial-Birth Abortion Ban of 2003, that “[w]here it has a rational basis to act, and it does not impose an undue burden, the State may use its regulatory power to bar certain procedures and substitute others, all in furtherance of its legitimate interests in regulating the medical profession in order to promote respect for life, including life of the unborn.”

Under a rational basis standard of review, a regulation will generally be upheld if is rationally related to a legitimate state interest.

In the Wisconsin case, a divided panel found that Wisconsin’s admitting privileges requirement did not meet this standard. Writing for the majority, Judge Richard Posner stated that “the requirement of admitting privileges cannot be taken seriously as a measure to improve women’s heath” because abortion clinics in Wisconsin make transfer agreements with hospitals and because they can call an ambulance if something goes wrong.

In upholding the district court’s injunction against the law, Posner took it upon himself to do a searching inquiry into the evidence at trial, eliminating (or ignoring) what he considered bad evidence and taking notice of facts outside the record. He also failed to apply ordinary rational basis scrutiny, as the dissenting judge noted, by shifting the burden of proof to the state to justify the rationality of its regulation rather than requiring the challenger to demonstrate that the law had no conceivable rational basis.

The Seventh Circuit’s analysis and conclusion differ from those of four other circuits on this issue. Recently, for example, the Fifth Circuit upheld a similar law in Texas, finding that there was “no question” that Texas’ stated reason for enacting the law—“to provide the highest quality of care to women seeking abortions and to protect the health and welfare of women seeking abortions”—was “a legitimate purpose that supports regulating physicians and the facilities in which they perform abortions.”

Interestingly enough, the Fifth Circuit additionally held that the lower court (which had struck down the regulation) erred by “substituting its own judgment for that of the legislature” on whether the regulation advances the state’s interests in women’s health.

The same charge could be levied against Posner. He denounced the legislature’s determination that the admitting privileges provision was to advance maternal health while philosophizing that its “true objectives” were to discourage women from obtaining abortions.

The Supreme Court has already agreed to hear the Fifth Circuit case. If Wisconsin also asks the Court for review, it could agree to hear this case as well, or it may “hold” it until the Fifth Circuit case is decided. Regardless, the nation will likely get some additional guidance about abortion regulations by the end of Supreme Court’s term in June.