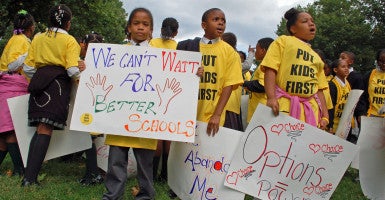 Josh Kaib is a reporter for Watchdog.org, a national network of investigative reporters covering waste, fraud and abuse in government. Watchdog.org is a project of the nonprofit Franklin Center for Government & Public Integrity.

This is shaping up to be the best year yet for National School Choice Week. The annual January event, which began in 2011, will feature 16,140 events, up from roughly 11,000 last year. The festivities officially kicked off across the country on Sunday and run through Jan. 30.

“From 150 events in 2011 to 16,140 events in 2016, the growth in enthusiasm surrounding National School Choice Week demonstrates that Americans in communities across the country recognize, more than ever before, the importance of ensuring that all children have the opportunity to learn and to pursue their own American dreams,” Campanella said in a statement.

The events, which are independently planned by schools and participating organizations, aim to increase the public’s awareness of education options, including traditional district schools, public charter and magnet schools, online education, private schools, and homeschooling.

“National School Choice Week provides an opportunity to start tens of thousands of conversations across our country about the benefits of choice and opportunity in K-12 education,” Campanella said. “We encourage everyone to get involved, to celebrate, and to have their voices heard during the week.”

Though National School Choice Week has spread quickly across the country, some areas are slower to adopt school choice policies. Charter school laws differ widely from state to state, and 27 so far offer private school choice initiatives including scholarships, vouchers, and education savings accounts. Scholarships are typically funded through tax-deductible donations from businesses and individuals, whereas vouchers and ESAs enable parents to decide where the public education funding set aside for their children should go.

This year’s National School Choice Week comes at a critical time. Last year, Nevada became the first state to enact a universal ESA. It would enable virtually all public school students in the state to attend the private schools of their choice by giving them a significant portion of the money that would have been spent educating them at a public school.

But earlier this month, a state judge issued an injunction against the program. Republican Gov. Brian Sandoval, who signed the program into law, is asking the Nevada Supreme Court for an expedited ruling on the program’s constitutionality.

“The best avenue is to obtain an expedited and final ruling by the Nevada Supreme Court,” the governor said. “Thousands of parents across Nevada are waiting for an answer.”

Nevada is taking a drastic step to improve its underperforming K-12 education system, but the Silver State isn’t alone. In Illinois, Gov. Bruce Rauner proposed Wednesday that the state take over the Chicago Public Schools because of the district’s financial woes. Democratic critics accuse him of wanting to weaken the teachers union and open more charter schools.

Rauner says finances are the motivating factor behind the move. But based on test scores and graduation rates, more charter schools would go a long way toward giving Chicago students a brighter future: Data from the Illinois Network of Charter Schools show that charter schools in Chicago are graduating more of their students, who are also performing better on the ACT.