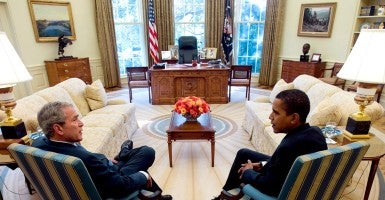 In one year, a new president will move into the White House and be greeted with the consequences of President Barack Obama’s failed national security policies. To confront the likely chaos, the president must be armed with strategies and flanked by advisers who will enable the president to lead on day one.

Though the first vote in the 2016 election hasn’t yet been cast, now is the time to plan the national security transition. Whether it is a belligerent Iran or menacing North Korea, or a terror plot against the homeland, the incoming president will need to be prepared to take decisive action immediately upon assuming office.

The incoming president will need to be prepared to take decisive action immediately upon assuming office.

As a member of President George W. Bush’s homeland security staff, I recall the president directing us to begin transition planning efforts in early 2008. The president emphasized the need to incorporate the national security environment we then faced into our planning efforts. Bush’s guidance proved prescient, as a terror threat aimed at Inauguration Day emerged just days before the January 2009 handover.

Inauguration Day was the capstone to months of joint planning undertaken by the outgoing and incoming national security teams. Bush appointees provided President-elect Obama and his staff with briefings, and they together exercised plans to address “day one” contingencies.

Even with the prior planning, both administrations were on edge, given the late breaking terror threat. President-elect Obama even had a secret statement in his pocket that he planned to read in lieu of his inaugural address had the threat materialized.

I later served on Mitt Romney’s pre-transition team, the Romney Readiness Project, when I saw firsthand the value of national security planning from a presidential nominee’s perspective.

We identified and vetted potential appointees for the Departments of Defense, State, and Homeland Security; prepared national security policy documents; and developed timelines for implementation well ahead of the election. And rather than tossing our plans in the dustbin after the election, we shared our lessons publicly in the hopes that the next transition could learn from our experience.

Today, the Partnership for Public Service is building on our efforts with the launch of its Center for Presidential Transition, which aims to improve the future transitions. But it will take the candidates and the Obama administration, as well as support from Congress, to ensure that the Partnership’s best practices are adopted.

Embracing what previous transition efforts have learned will ensure minimal disruption during the upcoming handoff and enable our future president to confront the global security challenges we face.