Martin Luther King Jr. and the Struggle for Integration 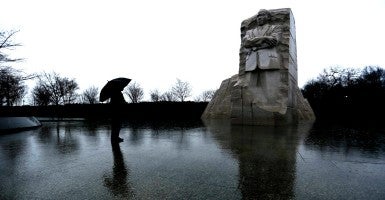 The third Monday of each January, we commemorate Martin Luther King Jr. by a national holiday. Mindful of his concrete actions and accomplishments and, still more, of his sublime words, his high hopes, and his ultimate martyrdom, we have come not only to admire, but even to revere King.

In obvious and less obvious respects, this is to the good. As we learn from James Madison and Lincoln as well as from King himself, a proper sense of reverence is a good and even a necessary quality in a free, self-governing people. Such a people must, however, cultivate understanding no less than reverence. Surely we honor King properly by paying him the respect of rational scrutiny.

Of our present circumstances, we can say that as a nation we are sharply divided over the chronically divisive issue of race—perhaps more dangerously divided over this issue than at any other point in the post-1960s, post-King, post-civil rights era.

We are divided over the boundaries of permissible speech on college campuses; over universities’ use of racial and ethnic classifications in admissions; over states’ enactments of stricter voter registration laws; and, above all, over the deaths of various African Americans in encounters with police officers and the consequent emergence of the “Black Lives Matter” protest movement.

Beneath those concrete controversies are divisions touching the republic’s first principles. At that deep level we divide regarding the nature and grounds of rights, the requisites for the rule of law, the proper mode and extent of racial integration—even over the grounds of allegiance to America.

On the question of his overall self-understanding, King’s partisans on the progressive left clearly have a stronger claim to him as one of their own than do those on the classical-liberal right. To say, however, that the progressive King is more representative of the true or real King is not to say that his left-leaning arguments are his best or most cogent arguments.

What if King was mistaken, as subsequent experience suggests he was, in expecting expanded federal antipoverty efforts to bring about the changes in culture and morale that he thought were needed for the elevation of the poor? If he was thus mistaken, then would not the adoption of such remedies result in the perpetuation, perhaps even the worsening, of the concentrations of poverty, with their attendant social dysfunctions, that troubled him?

Moreover, so far as the incidence of poverty is correlated with differences in race or color, as it was and is, would not the adoption of misconceived remedies render race relations increasingly strained over time? Would not such policies tend to promote disintegration rather than the integration to which King dedicated his life?

In the final reckoning, we honor King best by honoring what is best in King. We honor him best by honoring him as a profoundly courageous, unforgettably eloquent advocate of colorblind justice—of equality in natural, civil, and political rights irrespective of race or color. That principle, complicated and embattled as it has been and remains, is a precious part of America’s heritage and an indispensable pillar in the moral architecture of free society.

Honor King, then, as the most morally authoritative proponent of colorblind justice in U.S. history. As for the tensions or inconsistencies in his thinking about its proper means and modes, it is for us the living to think for ourselves how to resolve them.