What Michael Bay’s ‘13 Hours’ Reveals About the Benghazi Attacks 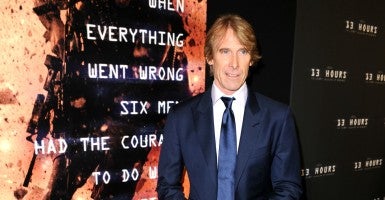 Director Michael Bay’s “13 Hours: The Secret Soldiers of Benghazi” is a dramatic recounting of the half-dozen CIA security contractors (former SEALs, Marines, and an Army Ranger) who responded to the Sept. 11, 2012, attacks on the U.S. diplomatic mission compound in Benghazi, Libya, and a nearby covert CIA intelligence collection facility.

Bay does a credible job of telling the story of great personal courage, both moral and physical, demonstrated by these men in doing what needed to be done to protect fellow Americans.

The film clearly makes the case that more could have been done, highlighting the Obama administration’s inaction that directly contributed to the loss of four Americans (Ambassador Chris Stevens, a U.S. Foreign Service information officer, and two security contractors, both former Navy SEALs).

As a movie, it is best in its action scenes and in conveying the confusion and ambiguity that accompany such situations.

Reading an evolving security situation; knowing when to pull a trigger and, often more importantly, when not to; and knowing how to keep one’s presence of mind when the world seems to be collapsing around you—“13 Hours” shows how heroic the accomplishments of “Rone,” “Tanto,” “Tig,” “Oz,” “Boon,” and Silva were in this regard throughout the crisis.

Bay took great care in getting the details right by enlisting the support of some of the security team heroes who were actually involved at Benghazi and who are at the center of the story. The equipment, tactics, trash-talking, and sequence of events are all spot on as a result.

The movie loses some of its steam during the quieter moments between attacks, when the dialogue falters and the acting seems stilted. If you are looking for a film that maintains its power and intensity throughout, re-watch Clint Eastwood’s “American Sniper.”

Still, it is well worth seeing, especially as a counter to the less well-grounded story promoted by President Barack Obama’s national security team.

As depicted in the movie, and substantiated in the book from which the movie is drawn and the personal testimony before Congress of those involved on the ground in Benghazi, multiple calls were made by those at the CIA facility for support and reinforcement—calls that were met with silence from Hillary Clinton’s State Department, David Petraeus’ CIA, and Leon Panetta’s Department of Defense.

“13 Hours” shows us that the attacks were planned, coordinated, and executed with brutal purpose and did not occur as a spontaneous uprising spurred by a third-rate video, as stated by Obama’s spokespeople. It also shows us what can be done by people who truly do care and are willing to accept great personal and professional risk to aid others in distress.

Lastly, it should not go unmentioned that the leader of one of the Libyan terror groups, Ansar al-Sharia, in Darnah, who attacked the U.S. mission and CIA facility, was reportedly Abu Sufian bin Qumu, who had been detained at Guantanamo but was released in 2007.

Various reports cite a recidivism rate of those released from Guantanamo of nearly one-third, surely something to keep in mind as Obama seeks to close the detention facility before the end of his final year in office.

See the movie to be reminded of the character of the men and women who work every day to defend our country and of the consequences when leadership fails to provide the support they deserve.