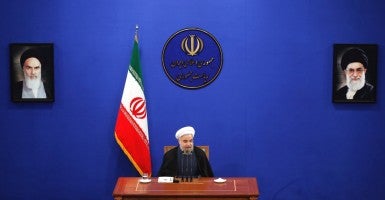 Given the news that Iran held U.S. naval personnel and their two vessels for a day or so, and broadcast the images and videos of the sailors, we thought it prudent to explore the legal, security, and policy ramifications of Iran’s latest provocative actions.

1) Why did Iran hold American sailors?

There are myriad issues tied up in Iran’s actions, and it is important not to merge or commingle the legal, national security, and political aspects of their actions. But before exploring those parts, it goes without saying that Iran clearly broadcast images of U.S. sailors, on their knees, as a way of embarrassing the sailors, this administration, and the United States of America. These are not the actions of a country that can be trusted, let alone those of what the Obama administration considers a potential ally.

2) Was the timing of this maritime capture and detention arbitrary, or is something else going on?

It was not arbitrary. Iran detained American sailors the same week the United States Supreme Court heard argument in a case dealing with whether Iran’s central bank must fork over $2 billion to American victims of Iranian terrorism, and shortly before the Iran nuclear deal is to be implemented, guaranteeing Tehran billions of dollars in sanctions relief. Iran knew the political stakes going into the capture and detention and exploited the situation for maximum advantage.

Maritime law applies in these contexts. Under maritime principles, a country whose shoreline touches an ocean enjoys sovereignty over the first 12 miles of water from land—called its territorial sea. Iran claims that ships from other countries must get permission to transit into its 12-mile zone—a claim that violates widely accepted principles regarding the territorial sea. Nations do not need permission to navigate in waters outside the 12-mile limit, as they are considered international waters.

Here, it appears that U.S. sailors drifted into Iranian waters, within the 12-mile limit. They did not have permission from Iran to do so, and this may have been Iran’s justification for seizing the U.S. vessels. Under the law, Iran should have simply demanded that the U.S. sailors leave their territorial waters, but Iran chose instead to detain them.

4) Were the American sailors held as prisoners of war (POW) under the Geneva Conventions?

No. For the Geneva Conventions to apply as a formal matter per Common Article 2, there must be a case of “declared war or armed conflict” between “two or more of the High Contracting Parties.” Iran and the United States are “parties” to the Geneva Conventions. However, since our Congress has not declared war against Iran, and since we are not in a state of armed conflict against Iran, the Geneva framework—including the Third Geneva Convention, which covers the treatment of POW—does not apply. This is true despite the fact that Iran is the world’s leading state sponsor of terror and is responsible for the deaths of hundreds of Americans in terrorist attacks against the Marine peacekeepers in Lebanon in 1983, the U.S. Embassy there, and U.S. forces in Iraq.

Those that claim, for example, that showing the videos of our sailors violates Article 13 of the Third Geneva Convention—which prohibits “acts of violence” and “insults and public curiosity”—are incorrect as a matter of formal law.

That does not in any way excuse Iran for their deplorable behavior in broadcasting the videos. Geneva Convention limitations are usually followed by states as a matter of practice even outside armed conflict.

5) Why is it being reported that an American sailor apologized?

Clearly the apology was something the Iranians wanted to hear. It makes it look as though we were at fault. It may have been coerced, or worse, forced out of the officer. An investigation will determine what really happened. That investigation may determine that our sailors violated Iran’s territorial waters.

6) How did the Obama administration respond?

The administration bent over backwards to absolve Iran of any wrongdoing in the incident. In fact, Secretary of State John Kerry effusively praised Iran’s dictatorship for freeing the sailors. Vice President Joseph Biden denied that any apology was made, which raises questions about how well-informed he is on critical issues.

Instead of holding Tehran accountable for its actions and deterring future acts of this kind by threatening heavy consequences in the form of sanctions or the use of military force, the administration meekly requested that Iran release the sailors.

This submissive response will only embolden Iran to take more provocative actions in the future and will further undermine the confidence of nervous Gulf allies about the value of relying on Washington to blunt the potential threat of Iran.

7) How does the Iranian nuclear deal relate to this?

The Obama administration desperately hopes to salvage some kind of a positive legacy in the Middle East, where its short-sighted policies have had disastrous consequences in Iraq, Syria, Libya, and elsewhere.

The flawed and risky nuclear deal with Iran is the administration’s long-shot bet on redeeming its catastrophic record. Instead of pushing back against Iran’s provocations, the administration has rolled over on one issue after another.

It agreed to waive new visa restrictions to help foreigners doing business with Iran after Tehran complained that this violated the nuclear deal. And it downplayed Iran’s firing of rockets in close proximity to a U.S. aircraft carrier earlier this month.

The administration’s passive reaction to the latest naval incident ensures that Iran’s provocations will continue.

This article was update by the authors.