How This Ultrasound Program Brought Life to 358,000 Babies 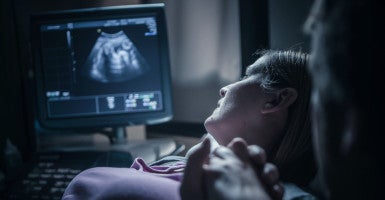 'Seeing people through the eyes of God and the dignity and the value of each person is kind of the foundation for how we want to teach one another and love one another,' Vice President of Community Outreach Kelly Rosati at Focus on the Family told The Daily Signal. (Photo: John Fedele Blend Images/Newscom)

The pro-marriage, pro-life group Focus on the Family is celebrating the 12th anniversary of Option Ultrasound, a program that rejoices in the birth of 358,000 babies who had been at risk for abortion.

“Here at Focus on the Family, what we wanted to do was help equip the pregnancy medical clinics around the country to be able to provide that ultrasound service to a woman who found herself with an unintended pregnancy and weighing her options,” Kelly Rosati, the Christian organization’s vice president of community outreach, told The Daily Signal.

Option Ultrasound was designed to provide grants to cover the costs of new ultrasound machines and sonogram equipment training for medical personnel at pregnancy centers around the country.

“Ultrasound has been described as a window to the womb,” Rosati said. “It gives the woman an opportunity to see for herself and to connect with her child.”

Since its start in January 2004, Option Ultrasound has provided 695 grants across all 50 states and one international grant.

“We do these grants specifically in high-abortion communities,” Rosati said, adding:

We have a set number that we are able to provide each year, and the way that we prioritize the need includes making sure that clinics in high-abortion communities are the priority for purposes of grants.

Along with the babies born instead of aborted comes an “equal number of moms who have been spared the pain associated with an abortion decision,” Rosati said, including dads and other family members involved in the decision.

“Sadly, I think abortion has really had a corrosive impact on the dignity and value that we all place on all human life,” she said. “I think as it cheapens life, and as that corrosiveness has taken hold, I think it causes a wedge.

“Seeing people through the eyes of God and the dignity and the value of each person is kind of the foundation for how we want to teach one another and love one another.”

Focus on the Family says it collects “rigorous data” and powerful stories of women who chose to have their babies after having an ultrasound. The majority of women who start out leaning toward an abortion will carry a baby to term after receiving counseling and an ultrasound, the group found.

“One of the things that we’ve done through the program is continually investing in the medical clinics that we work with,” Robyn Chambers, director of Option Ultrasound, told The Daily Signal.

“We’ve been able to go into these clinics and really identify their greatest need,” Chambers said. “Maybe it’s a replacement machine or additional nurses trained. … It’s not just one machine and we’re done.”

Option Ultrasound, funded entirely by donors, has channeled millions of dollars’ worth of help to pregnancy centers. Rosati said:

We have more requests for grants than we are able to fulfill right now. We are looking at ways that we can possibly expand and continue to meet this need and partner with the local pregnancy centers to provide these services to women.

The future is as bright as ever.