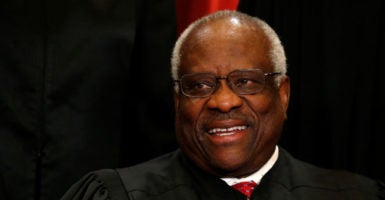 “When I was a kid, even as we had laws that held us apart there were things that we held dear that we all had in common,” Justice Clarence Thomas says. (Photo: JONATHAN ERNST/REUTERS/Newscom)

Supreme Court Justice Clarence Thomas appeared on Fox News for a rare television interview Wednesday night, where he expressed concern about societal cohesion in view of protests staged by professional athletes during the national anthem.

“What binds us? What do we all have in common anymore?” Thomas asked.

“When I was a kid, even as we had laws that held us apart there were things that we held dear that we all had in common,” he added. Thomas was born in Georgia’s coastal lowlands among Creolite gullah speakers, and was raised by his grandparents in Jim Crow Savannah.

Thomas wrote extensively about his family’s experience in the segregated south in his memoir “My Grandfather’s Son.” Elsewhere in the interview, Thomas praised his grandparents for their fortitude during the heady days of white supremacy, suggesting contemporary activists could benefit from their example.

Thomas made the comments on Laura Ingraham’s new Fox prime-time program “The Ingraham Angle.” Ingraham clerked for the justice shortly after graduating from the University of Virginia School of Law.