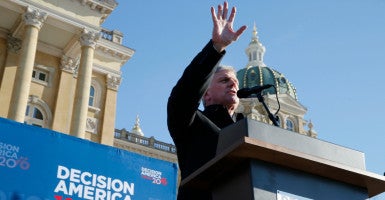 'Be willing this next election to vote. Vote for candidates that stand for biblical truth and biblical principles and that are willing to live them,' evangelist Franklin Graham said. (Photo: The Billy Graham Evangelistic Association)

DES MOINES, Iowa—Evangelist Franklin Graham prayed for what he called America’s needs during a rally he led from the steps of the Iowa State Capitol.

“Right now we need to get godly men and women to vote and to run for office,” Graham said. “Your vote counts. America needs the Christian vote.”

Graham, the eldest son of 97-year-old evangelist Billy Graham, began a nationwide “prayer tour” by telling a crowd of more than 2,500 that the United States is in “big-time trouble.”

Iowans warmly welcomed Graham, despite cold weather, as he urged them to pray and vote for Christian leaders.

Great to see over 2500 people turn out to pray for the nation today in Des Moines, Iowa! #DecisionAmerica pic.twitter.com/JDwXLo5dUu

“America is being stripped of its biblical heritage [and] God-inspired foundations,” Graham said.

Graham, 63, who recently announced he had left the Republican Party, encouraged fellow Christians to be engaged in the political process. He said:

Be willing this next election to vote. Vote for candidates that stand for biblical truth and biblical principles and that are willing to live them. If we don’t, this country’s not going to stand much longer. It’s going to fail.

Getting ready for the @Franklin_Graham #DecisionAmerica prayer rally tour to kick off in Des Moines pic.twitter.com/OzGOEMNb7r — Leah Jessen (@_LeahKay_) January 5, 2016

Graham preached to and prayed with the Iowans who gathered in the capital city of the Hawkeye State, which is home to the nation’s first presidential caucuses next month.

“It’s not that the enemy is at the gate. They’ve come through the gates,” he said. “We have left the gates wide open and  have allowed our moral walls to fall down.”

In the last election, Graham said, an estimated 20-30 million evangelical Christians did not vote. “We talk about national elections, but I want to remind you what some of the most important elections are mayors, city council, county commissioners, judges, school boards,” he said, adding:

Could you imagine that in the next two, three election cycles that the majority of the mayors and city councils of America were born-again Christians, the impact that that would have on this nation and our cities?

He suggested that his listeners form prayer groups and start praying for the local community they live in.

“Our educators and our politicians and our churches seem many times to be more concerned about political correctness than God’s truth and his righteousness,” he said.

Graham heads up both the Christian nonprofit Samaritan’s Purse, which lends hands and resources to disaster-stricken places around the world, and the Billy Graham Evangelistic Association. Franklin Graham will hold prayer rallies in the capitals of all 50 states on his Decision America Tour. (Photo: The Billy Graham Evangelistic Association)

“The most important thing we can do is pray. God hears prayer and God answers prayer.”

Iowa was Graham’s first stop on the Decision America Tour. He plans to hold prayer rallies in the capitals of all 50 states.