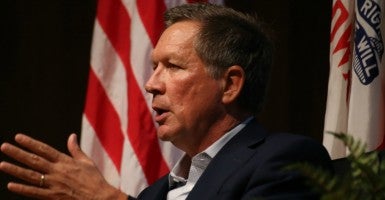 DES MOINES, Iowa—After more than 16 years without a visit to the Hawkeye State, Ohio Gov. John Kasich headed to Iowa yesterday to tout his record as governor and make the case to voters that he should be the Republican with a shot at the White House.

Kasich, who appeared comfortable with the audience, spoke at the Iowa State Historical Building for a Greater Des Moines Partnership forum in a series leading up to the 2016 Iowa Caucus.

In his speech, the Ohio governor spoke of the five values he believes are critical for America: personal responsibility, resilience, teamwork, faith and family.

“These are things I learned as a kid, and they’ve stuck with me,” Kasich told the audience. “I believe everything has to be reformed and innovated in the government.”

Though Kasich hasn’t officially announced his run for the president, he’s made several stops to South Carolina and New Hampshire, the early primary states. His visit to Iowa was his first of the 2016 election cycle.

During his speech, Kasich told the story of how he went from an Ohio senator to a U.S. representative and referenced his experience with defense and crafting budgets

“I never thought I would be back in politics,” Kasich said, speaking to the time following his 18 years in Congress.

Kasich also used the Biblical story of Jonah as a comparison, as he spent 10 years in the private sector, but then felt it was his calling to run for governor. He was elected governor of Ohio in 2011.

Stepping into office in a struggling state—which had an $8 billion deficit—Kasich made light of the fact that, according to polls when he took office, he was the most unpopular governor in America.

Kasich also spoke about his experience cutting taxes and with the justice system, including how he made the decision to improve access to treatment for those with mental illness instead of placing them in prison.

He touted his record of improving education and reforming the criminal justice system in Ohio while he served as governor.

After speaking, Kasich took questions from event attendees, where he was asked about a variety of issues ranging from education to national security and immigration.

“We need to get things moving,” Kasich said when asked about immigration.

He stressed that border security is a top priority, but stressed that immigrants already in the United States need to apply for legal status.

Kasich formed a committee to explore a presidential run in the 2000 election, but dropped out.

Though the Ohio governor is expected to announce his candidacy, he teased reporters about his plans.

“I’ll be back to let you know how it goes,” Kasich said.