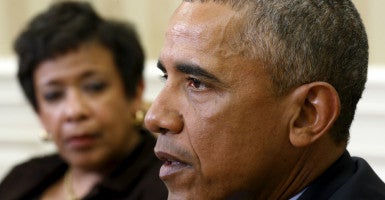 Republican lawmakers hit back on President Barack Obama’s plans to unveil a series of executive actions this week aimed at tightening gun laws.

“While we don’t yet know the details of the plan, the president is at minimum subverting the legislative branch, and potentially overturning its will,” Ryan, R-Wis., said in a statement.

House Majority Leader Kevin McCarthy criticized Obama on Twitter, writing that his plan “poses a grave threat” to the separation of powers and charged that the president is attempting to “legislate from the executive branch.”

Executive overreach on #2A that President Obama is considering poses a grave threat to our constitutional separation of powers.

The President is wrong to target our constitutionally protected #2A rights. The American people won’t stand for unilateral executive action.

He said the recommendations from his cabinet were “well within” his legal authority and “entirely consistent with the Second Amendment.”

For the United States to fully address gun violence, he said, “Congress needs to act.”

The key proposal Obama is expected to announce would allow the president to sidestep Congress to require more gun dealers to obtain a federal license and conduct background checks on customers purchasing firearms.

The shift would expand the definition of who is considered a firearms dealer under federal law, encompassing a broad number of people who are currently exempt to force more sales on government records.

The administration hopes the change will capture unregistered dealers who escape background checks by selling at gun shows, online, and at other venues not covered under law.

The White House is also set to implement stricter requirements on reporting lost and stolen weapons, a measure the Bureau of Alcohol, Tobacco, Firearms and Explosives advocated for in 2014 but failed to pursue against gun advocates, who claimed that voluntary reporting was adequate.

Ryan said none of Obama’s proposals would have prevented the recent mass shootings in the U.S. and that the focus should instead be on addressing mental illness.

“His proposals to restrict gun rights were debated by the United States Senate, and they were rejected,” Ryan said. “No president should be able to reverse legislative failure by executive fiat, not even incrementally.”

Obama’s executive gun orders must be rejected. We are a #ConstitutionalRepublic & Pres. cannot bypass Congress when initiatives are blocked.

Instead of going against the will of Congress, the President should work w/ us on reforms that would actually reduce violence.

In his weekly address released New Year’s Day, Obama said his 2016 resolution was to move forward on “unfinished business”—specifically, the U.S.’s “epidemic of gun violence.”

He is expected to release specific details of the plan during a town hall Thursday at George Mason University.

“We know that we can’t stop every act of violence. But what if we tried to stop even one? What if Congress did something—anything—to protect our kids from gun violence?” Obama said.

Current law requires anyone who is “engaged in the business” of dealing firearms to be federally licensed, thus requiring the seller to perform background checks.

The administration’s measure would clarify who is considered “in the business” of selling guns, requiring that anyone who sells a specific number of guns register with the ATF and conduct background checks.

Sen. Marco Rubio, R-Fla., said Sunday the president’s planned executive actions would undermine the rights guaranteed under the Second Amendment, remarking that Obama has “waged war on the Constitution.”

“Law-abiding gun owners are not the problem in this country. The problem are criminals, and criminals don’t care what laws you pass,” Rubio said. “You can pass all the gun laws in the world that you want. It will not stop the criminals.”