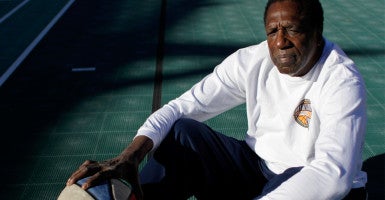 'I wanted to leave the game better than I found it': Meadowlark Lemon of the famed Harlem Globetrotters basketball troupe, died Sunday at 83. (Photo: Joshua Lott/Reuters/Newscom)

Lemon, dubbed the “Clown Prince of Basketball,” was famous for his trademark hook shot as well as his on-court comedy at the height of the Globetrotters’ popularity in the 1960s and 1970s.

He was considered by many to be a role model for black youth because of his good-humored pursuit of excellence. He was a vocal supporter of voluntary prayer in school.

We are deeply saddened by the passing of our beloved Meadowlark Lemon. He was 83. #RIPMeadowlark pic.twitter.com/tCRWkZUD3h

The Globetrotters regularly appeared on TV on “The Ed Sullivan Show” and other variety shows in those days, and Lemon’s cartoon likeness later was featured on the animated “Scooby-Doo.”

Mannie Jackson, a former owner of the Globetrotters, credited Lemon with transforming the game of basketball as well as changing  “attitudes about race” around the world, telling USA Today:

He believed that if you accepted him first on the basis of his many talents and his integrity and if you could make someone laugh, he would get you to listen, to believe and to change. He changed people’s attitudes about race. He changed foreigners’ attitudes about America and along the way, he made millions love the game of basketball.

Our dear Meadowlark passed away yesterday in his sleep at home in AZ. His memory will always be cherished by his friends, fans, and family.

At 6 feet, 3 inches tall, Lemon, who grew up poor in Wilmington, N.C., realized a boyhood ambition by playing for the Harlem Globetrotters from 1954 to 1978. According to his website, Lemon played more than 16,000 games in his career. He was known for rarely missing a game.

Meadowlark Lemon played in more than 7,500 consecutive games and in over 100 countries during his 24 seasons with us pic.twitter.com/4nQOX1GWUD

In 2003, Lemon was inducted into the Naismith Memorial Basketball Hall of Fame.

After retiring, he became an ordained Christian minister and, in 1994, established Meadowlark Lemon Ministries with his wife to run basketball camps and visit juvenile detention facilities.

“I feel if I can touch a kid in youth prison, he won’t go to the adult prison,” the Associated Press quoted Lemon as saying in 2003.

The cause of death has not been reported.

Upon hearing the news of his passing, fans took to Twitter to celebrate Lemon’s accomplishments, both on the court and off.

Rest In Peace Meadowlark Lemon. Check the faces of the kids. Wish I knew who took the photo. pic.twitter.com/yOEoWQvvvp

His passing cried me to sleep last night. Meadowlark Lemon was more than my friend…I loved & will miss this man!? pic.twitter.com/TWRgdgnvNR

If u saw @Globies Meadowlark Lemon as a kid-like most of us did, the memory has to bring a big smile to your face!! Thx for the laughs! RIP

RIP #meadowlarklemon Because of him as a kid I wanted to grow up and be a @globies #RIP… https://t.co/fSPDnuzaqK

Did you know #MeadowlarkLemon was a follower of Jesus, and a preacher? Here's more about his faith: https://t.co/2etulxQca7

To A GREAT Man! A Role Model, A Pioneer, A Legend, & A Mentor… I'm blessed to have spent time with u. U will be missed #RIPMeadowlarkLemon

Every NBA game should feature a confetti-in-water bucket moment during the first timeout, in tribute to the late great Meadowlark Lemon.

“I had a dream, and I worked at it. I wanted to leave the game better than I found it.” -Meadowlark Lemon pic.twitter.com/pQc0vllcEr

Sad news to wake up to.. few athletes have ever entertained more people in this world than Meadowlark Lemon did. https://t.co/zUPEriqgLr

This dude was so cool and fun to watch growing up RIP Meadowlark Lemon pic.twitter.com/oFqPLImV8A

I mourn the passing of my childhood hero Meadowlark Lemon. As a cartoon, when paired with Scooby Doo and solving crimes, he was transcendent

Farewell @meadowlarkL … to exit this life having created a lot more smiles than frowns is a worthy achievement.

We lost a great man today who cared deeply for others Honored to get to know #MeadowlarkLemon if even just a little pic.twitter.com/wky19u1XV5

This report was updated to include more tweets.