Is a 16-Year-Old Mature Enough to Vote? This Campaign Thinks So. 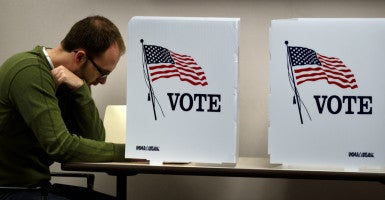 'We need innovative solutions to figure out how we can get more people to participate in our political process,' Scott Warren, Generation Citizen executive director, said. (Photo: Bob Pearson/EPA/Newscom)

A new campaign is striving to engage young people politically by lowering the voting age.

Vote16USA is “dedicated to exploring the notion of lowering the voting age to 16 in cities and states across the country,” Scott Warren, co-founder and executive director of the organization Generation Citizen, told The Daily Signal.

“We want to have a conversation in this country about what the best age for voting is,” Warren, 28, said, pointing out that his organization, which launched the effort, does not have any “political bent.”

“We need innovative solutions to figure out how we can get more people to participate in our political process.”

A report released by the group last week notes that 36 percent of eligible voters participated in the 2014 midterm elections. In the same election, 20 percent of 18- to 29-year-old voters actually voted. This was the worst voter turnout in 72 years, it said, and the lowest turnout for young voters on record.

“Generally, right now, there is definitely a lack of interest and excitement, especially among young people, in politics,” Brandon Klugman, an American University senior who is Vote16USA campaign coordinator, told The Daily Signal.

“We shouldn’t be lowering the voting age if we’re not also teaching young people to participate,” Warren said.

The movement is not without critics.

“This is a foolish idea,” said Hans von Spakovsky, a senior legal fellow for The Heritage Foundation, who manages the think tank’s Election Law Reform Initiative.

“Sixteen- and 17-year-olds have neither the experience, the judgment, or the maturity to make decisions in the voting area,” von Spakovsky said. He added:

Warren said it’s a “slippery slope argument” to compare the appropriate ages for driving, voting, military service, and so on.

The campaign to lower the voting age spread to San Francisco and Washington, D.C., and organizers are exploring other cities around the country.

“We think that this is a city issue,” Warren said. “We don’t want this to be federal government telling states and cities what to do. We want cities to decide this on their own.”

“There are 10 states where local cities can change their laws so that 16- and 17-year-olds can vote in local elections,” he said. “That’s what we want to pursue right now.”

Vote16USA cites two Maryland towns, Takoma Park and Hyattsville, as examples of places that have lowered the local voting age to 16 in recent years.

Heritage’s von Spakovsky points out that Takoma Park is also a place that allows non-citizens to vote. “It is not an example I would urge anyone to follow,” he said.

The voting age in the United States was lowered from 21 to 18 with ratification of the 26th Amendment in 1971.

“The issues on the local and the state and the federal levels—all those issues affect young kids,” Darrell Beauchamp, a father of two, told The Daily Signal. “They can take an interest in those issues and learn about them without necessarily having to vote.”

Beauchamp’s two children, ages 16 and 12, take a keen interest in politics. During summer vacation this past year, the family became actively involved in learning about the political process firsthand.

They’ve traveled to see 17 senators, governors, and other politicians speak. On multiple occasions, they jumped in their car and logged over 330 miles from their hometown of Wales, Wis., to attend events all over Iowa, site of the first presidential caucuses.

“There’s plenty of ways that people of any age can be engaged [in the political process.] … You don’t have to vote just to be involved in it,” Beauchamp said. “I think my kids are a real good example of that.”

Having some doubts about 16-year-olds voting, Beauchamp said he is in favor of keeping the voting age at 18:

I would be concerned with it, just knowing where I was at when I was 16. Kids at that age are just so impressionable. I would be bothered by having kids that young voting. I think it raises some interesting issues for teachers, probably, too. If you get an unethical teacher, they might start trying to influence kids more in the classroom and try to directly influence their votes. I think it creates a lot of different problems and potential conflicts in that regard.

Beauchamp’s 16-year-old son, John, has a different opinion on the voting age.

“I think that the people who are really interested in politics, like me, should have some sort of say in this,” John told The Daily Signal. “Because it’s frustrating how we have to pay taxes and we get to work, but we can’t vote.”

John, who pays taxes on his wages as an employee of Goodwill, said he would like to be able to participate in local elections.

“I definitely am looking forward to being able to vote,” he said.