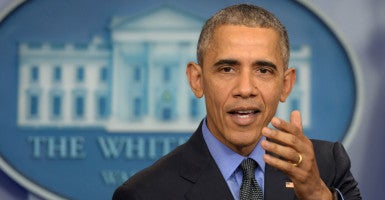 President Barack Obama shortened the sentences of 95 federal inmates on Friday, in his latest mark on a bipartisan push to reduce prison overcrowding and undo the harshness of the nation’s war on drugs.

After using executive authority to grant his third batch of clemencies during his administration, Obama has now granted 184 commutations — more than the last five presidents combined.

Obama granted clemency to 22 drug offenders in March and another 46 in July, including Douglas Lindsay, 47, from Newberry, S.C., who The Daily Signal profiled earlier this month.

“This is a very generous move by the president and a sign that he sees big problems in the criminal justice system and wants to do everything he can to fix it,” said Molly Gill, government affairs counsel at Families Against Mandatory Minimums, in an interview with The Daily Signal.

“President Obama is using his constitutional power to continue the drum beat that we need to pass legislation, fix unjust sentences, and reduce sentence length overall, and he is using the tools he has to do that.”

Most of Friday’s commutations went to nonviolent drug offenders who have been imprisoned for more than a decade and would have been sentenced to less time under current rules.

“This is an area where we can save money and reduce recidivism, where people who commit nonviolent crimes are released in a reasonable fashion,” Obama said during his end-of-year press conference on Friday.

Inmates given clemency do not leave the prison system right away. They are sent to lower-security prisons and then halfway houses to ease their transition, before they are released from the custody of the Federal Bureau of Prisons in April. Most ex-inmates then have to undergo five years of probation.

>>>Finally Home, but to What? After Obama Grants Him Clemency, a Federal Prisoner Rebuilds Life

A commutation is a form of clemency that keeps the conviction but ends the sentence.

Compared to commutations, Obama has granted far fewer pardons, which eliminate the conviction and restore the rights of ex-inmates, easing their path to landing jobs, finding housing and rebuilding their lives. Kelsey Lucas/Visualsey for The Daily Signal

Obama has administered 66 pardons, including two on Friday, less than 3 percent of the petitions filed, according to The Marshall Project, and less than any president since John Adams.

“Unlike other unilateral actions that President Obama has taken, he has clear constitutional authority to take the actions he took today,” said John Malcolm, the director of The Heritage Foundation’s Meese Center for Legal and Judicial Studies.

“One can only hope that these offenders, who have been given a new lease on life, will prove to have been worthy of the gift they have been given. If that proves to be the case, then not only will their lives be better, but the lives of their loved ones and of society as a whole will be too.” It is especially seen as a positive sign for the progress of Clemency Project 2014, an organization set up by the Justice Department where nonprofit groups and pro-bono lawyers assist federal prisoners looking to shorten their sentences.

Of the 95 commutations Friday, 27 were screened through the Clemency Project, after only four of the previous ones were facilitated through the organization.

The Clemency Project has received roughly 34,000 applications, about half of whom were deemed ineligible under White House criteria requiring clemency beneficiaries to have served at least 10 years in prison, with no violent history and perfect behavior.

Applications approved by the Clemency Project have to undergo several more layers of review inside the Justice Department, before getting to the White House.

“While it is my hope that President Obama will increase the use of his clemency power going forward, one can only be happy for each and every of today’s grantees and their loved ones.” said Cynthia W. Roseberry, project manager for Clemency Project 2014, in a statement.

Despite the calls for more action from Obama, the most meaningful dent in the federal prison population will have to come from Congress.

Both chambers of Congress are debating several bipartisan bills to change sentencing laws, and House Speaker Paul Ryan, R-Wis., has expressed support for getting something done on the issue next year.

“Some people of Congress might react strongly when they see 95 people are getting out of prison, but we have to remember people change in prison, better themselves, and deserve a second chance,” Gill said.

“This is just another signal that Congress needs to act. This is one problem we can’t commute our way out of.”