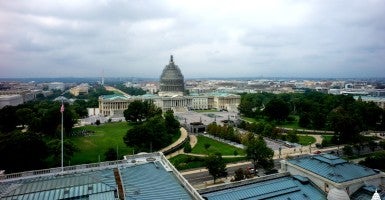 A favorite budget gimmick of congressional appropriators has reared its ugly head once again in this week’s omnibus appropriations bill, which was released on Wednesday.

Commonly referred to as CHIMPs, Changes in Mandatory Programs are changes to mandatory spending and entitlement programs that affect current-year budget authority. Reductions in mandatory program authority are treated as changes in discretionary spending for the purposes of congressional scoring. This way CHIMPs free up more money for Congress to spend.

Because any “savings” are mostly an on-paper exercise, CHIMPs represent accounting gimmicks. Mandatory spending is merely delayed to a later year, and these so-called savings allow for additional discretionary spending in the current budget year.

As if the additional $50 billion in spending above the budget caps wasn’t already excessive, the omnibus bill released in the early hours of Wednesday morning contains a total of $18.6 billion in CHIMP “savings.” According to the Congressional Budget Office, in reality, these CHIMPs save only an abysmal $65 million in actual outlays over the 10-year budget window. Pure and simple, this is just another example of Congress using phony accounting practices to increase discretionary spending, by circumventing the Budget Control Act and the Bipartisan Budget Act inflated caps.

The largest CHIMP offender in this year’s omnibus (and every year) is the Crime Victims Fund (CVF) within the Department of Justice. The Crime Victims Fund is a mandatory program that is funded by fines, forfeited bail bonds, and additional federal criminal penalties. These funds are supposed to be used to provide state and local grants to compensate crime victims. Instead, the account is used every year as a budget gimmick to pump up discretionary spending. This year it comes in at a whopping $9 billion in phony savings, with $0 in real outlay savings over the years. The omnibus specifies an obligation limitation of $3 billion for the Crime Victims Fund, so to count anything above that amount as savings is pure gimmickry.

The other largest CHIMP offenders in the omnibus bill are changes to the Children’s Health Insurance Fund and the Child Enrollment Fund. Between the two, $6.8 billion in savings are claimed, with $0 in outlay savings over the budget window.

In all, there are over 40 CHIMPs included in the omnibus, and nearly 40 percent include zero real outlay savings.

Unfortunately, CHIMPs are not a new phenomenon and are likely to continue to be used in future appropriations bills. If CHIMPs continued at the rate that is in the omnibus, there will be almost $200 billion in additional discretionary budget authority over the next 10 years. We’re talking about real money here!

The FY2016 (fiscal year) Conference Budget Resolution agreed upon earlier this year took a first step in limiting future bogus CHIMP savings by placing a limit on the amount that can be used in each of the next four years. However, Congress needs to go farther and take action to stop this additional spending completely. The use of CHIMPs undermines fiscal accountability and transparency. With our nation facing monumental deficits and debt, we simply cannot afford any more.