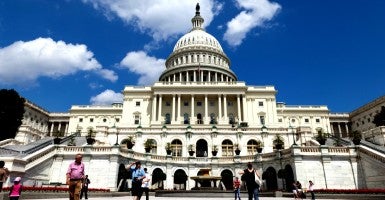 Congress appears to be looking at a scaled back two-year extension of all the policies in the tax extenders, rather than the bigger deal that was being discussed. However, the two-year straight extension would be augmented by a two-year delay of the start of the Cadillac tax on high-cost health insurance plans.

The Cadillac tax was part of Obamacare and isn’t scheduled to start until 2018. A two-year delay would push it back to 2020.

That tax is not a good policy, but delaying it is a missed opportunity to fix what is bad about it and use it to advance free-market health policy.

But because the Cadillac tax does not directly fall on the employees who receive the plans, but rather on their employers, it does not function as well as an explicit cap would. Nevertheless, it can still be used as a pivot to the right policy of capping the exclusion for employer-provided health insurance and providing a credit for individuals to buy insurance on the open market.

Rather than delaying the Cadillac tax, Congress should be focused on making the long overdue step of converting it to a cap in a revenue-neutral way. Setting a cap on the amount of health insurance that can be purchased on a pre-tax basis would be consistent with the existing caps on pre-tax funding of other employee benefits such as life insurance, retirement accounts, and dependent care accounts.

Like those other caps, but unlike the Cadillac tax, a cap on the tax exclusion for employer-provided insurance would not force employers to alter their plans. Instead, it would put employees in the position of choosing whether they want to take their compensation in the form or health benefits or cash wages.

There is also talk about delaying other taxes that were part of Obamacare, like the medical device tax, in the extenders bill.

A two-year extension of the tax extenders is a punt. Congress should’ve gone through all the policies in the package and made those that reflect sound policy permanent, while eliminating those that don’t permanently in a revenue neutral way. Now that it has passed on that opportunity to improve the tax code, it should not complicate the package further. Instead, it should stick to a straightforward extension of the policies that are traditionally in the extenders and leave it at that.