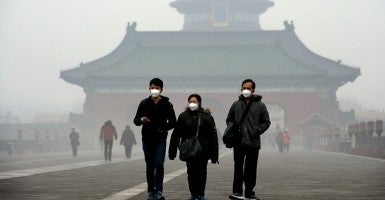 Smog in Beijing, China that is reported to have spread to neighboring areas, affecting more than 300 million people. Dec. 9 (Photo: Kyodo/Newscom)

On Monday, for the first time, Beijing announced a “red alert.” The alarm was a consequence of the thick smog that had blanketed the city and was deemed a health hazard even to healthy residents of Beijing.

The air quality is rated on a scale of zero to 500 (the higher the number, the worse the air quality). Red alerts are supposed to go into effect if the number stays above 200 for more than 72 hours (which happens frequently in China’s major cities, particularly in the north). The U.S. government rates anything above 200 as very unhealthy and 301 to 500 as “hazardous.”

On Monday, Beijing’s reading was 253.

Chinese authorities have responded with a number of strict measures to mitigate the toxic air from entering the mouth, throat, and lungs. This week, schools will be required to close at noon, motor vehicles can drive only on alternate days, government agencies will be required to keep a good fraction of their vehicles off the road, and outdoor cooking of any kind (which is very popular on the streets of Beijing) will be temporarily banned.

A report issued earlier this year estimates that air pollution could prematurely kill more than 250,000 Chinese residents in their larger cities.

Going indoors to restaurants or business offices often does not provided relief. Despite the smoking ban in public places, many locales cavalierly ignore the rule, and indoor air levels can easily exceed those of the pollution outside.

Having lived in Beijing recently for three years, I can attest to the devastating effects of pollution. Some estimates say that living in Beijing is equivalent to smoking two packs of cigarettes a day. During my second year in China’s capital, my American doctor scolded me for taking up smoking (I have never smoked a cigarette in my life).

During my second year in China’s capital, my American doctor scolded me for taking up smoking (I have never smoked a cigarette in my life).

My office was several blocks from the Bird’s Nest, the stadium built for the 2008 Olympic games. On many occasions, I was unable to see the gigantic monstrosity. In physical appearance, I’ve been told I aged a decade in just 37 months. Photos confirm this.

After 35 years of environmental degradation to keep growth rates elevated, China is feeling the consequences. How it handles the toxic carpet blanketing its cities while economic growth grinds down will be a real challenge—one it may not be able to pull off.