America Does Not Have an Islamophobia Problem 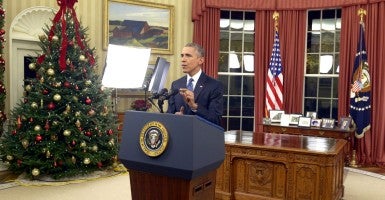 "FBI statistics show that Jews, not Muslims, are the greatest victims of what is designated as religiously targeted hate crimes in America."(Photo: Saul Loeb/CNP/AdMedia/SIPA/Newscom)

At his national address Sunday night, President Barack Obama lectured Americans at length on the evils of Islamophobia. That is a lofty sentiment, no doubt, but the harangue did strike many as disproportionate. After all, on this score Americans can already be rightly proud.

Despite 9/11; two long and grinding wars against two Muslim countries; terrorist attacks at Fort Hood, Chattanooga, and San Bernardino; and the threat from ISIS, a murderous cult that has beheaded compatriots, Americans have by and large been paragons of equanimity and tolerance.

Candidates may say many things in the midst of an electoral year, but the FBI statistics show that Jews, not Muslims, are the greatest victims of what is designated as religiously targeted hate crimes in America.

To be sure, there have been isolated incidents of bigotry, such as windows broken at an Islamic center in Palm Beach Friday night, and they are reprehensible. But the real story here is that these are isolated events, and thankfully not part of some national furor.

And therein lies the problem. Obama may actually make Islamophobia more likely by A, not reassessing his failed strategy against ISIS, and B, appearing to cynically raise fears of Islamophobia to promote his multicultural agenda.

On the first score, we have the words of former British Prime Minister Tony Blair, who visited Washington last week and had this to say in a speech at the Library of Congress:

A continued failure to recognize the scale of the challenge and to construct the means necessary to meet it, will result in terrorist attacks potentially worse than those in Paris, producing a backlash which then stigmatizes the majority of decent, law-abiding Muslims.

Continued failure to recognize the scale of the challenge or to construct the means to combat it describes precisely the Obama approach, from calling ISIS the “JV team” to obtuse statements about how the way to rebuke ISIS is to lower carbon emissions.

On Point B, the president’s incessant cynicism about his opponents’ motives has never helped the case he is trying to make. Take the issue of refugees.

As with rejection of Islamophobia, taking legitimate refugees is a virtue in which Americans have every right to take pride. The United States, in fact, has taken in 748,000 refugees since Sept. 11, 2001. Over the past few years, despite the ever-present threat of terrorism on the homeland, the United States has responded generously to the plight of refugees worldwide by accepting them at a rate around 70,000 per year.

Americans also have every right to demand that their government keep them safe. The tension between these two positions should have been handled in a debate that could have proceeded diligently had Obama but sought to understand and unite the nation he purports to lead.

Alas, that’s not what happened. Instead, Obama—clearly peeved that Congress and state governors were moving because they mistrusted him—poured hot oil on a sensitive situation. His petulant performance only gave the congressmen and governors more reason to question his actions and instincts.

Obama’s first instinct was to pour invective on those seeking stricter safeguards on refugees. They were not simply leaders with whom he disagreed; they were “un-American” and “shameful.”

When the House of Representatives, with the support of 47 Democrats, voted overwhelmingly on Nov. 19 to pass a bill that blocks Syrian and Iraqi refugees from entering unless they pass strict background checks, the president reproached them for being “scared of widows and orphans.”

It was all done from overseas, too, in the midst of a presidential tour of Turkey and the Far East. And Obama showed far more emotion when berating his American opponents than in condemning the Nov. 13 terrorist attacks in Paris that left 130 dead and led to the refugee discussion here.

Instead of pillorying those with concerns after a tragedy, the administration, from the president on down, should have sought to make its case on the vetting process to legislators, governors, and regular Americans. Policymakers deserve to see what the intelligence is on the refugee process and how the process mitigates any risk. The administration should have kept Congress regularly informed to any changes in the process and why such changes were made.

We should seek to further all of the U.S.’s national interests by keeping the U.S. homeland secure, helping those who are persecuted, and advancing American leadership around the world.

This starts by engaging with each other and the facts here at home. The president’s churlish approach has served to divide America. We’re all now reaping the whirlwind.