Lawmakers Vote in Favor of Cronyism, but It Won’t Be Business as Usual for the Ex-Im Bank 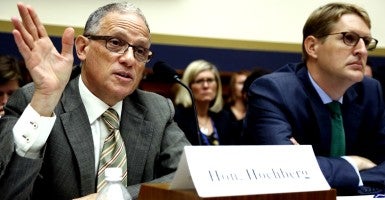 By restoring the corporate welfare doled out by the Export-Import Bank, a majority of Congress on Thursday demonstrated yet again their stubborn allegiance to special interests over the public interest.

But the bank won’t be back to business as usual—i.e., financing foreign deals for some of America’s most successful conglomerates—until a vacancy on the board of directors is filled. And there’s certainly no reason to rush it.

The bank’s charter was reauthorized through 2019 as a rider to the bloated multi-billion dollar transportation measure passed by the House and Senate yesterday. The 2012 Ex-Im charter was initially slated to expire on Sept. 30, 2014, but was extended for nine months. That extension ended on June 30, and the bank has been prohibited from transacting new deals in the months since.

With few exceptions, all financing that exceeds $10 million must be approved by the bank’s board of directors. Under the bylaws, board action requires at least three directors. Currently, however, there are three vacancies on the five-member board; only Ex-Im Chairman Fred Hochberg and Vice Chairwoman Wanda Felton are active. The White House has nominated former Ex-Im board member Patricia Loui-Schmicker to a second term, but the Senate Banking Committee has yet to hold a hearing on her nomination.

That shouldn’t be a problem for all the bank supporters who have insisted for the past two years that reauthorization is critical to the fortunes of small businesses. In recent years, the vast majority of subsidies have benefited the likes of Boeing, Caterpillar, General Electric, John Deere, and other industrial titans. But Ex-Im doesn’t need a quorum to assist the smaller exporters who the U.S. Chamber of Commerce and the National Association of Manufacturers have long maintained are their primary concern.

The lack of a quorum also shouldn’t bother all the Democrats who sided with corporations over taxpayers in gunning for Ex-Im reauthorization. Rarely did a week go by when a member of the party didn’t bemoan the fate of small businesses in his district that lacked access to Ex-Im financing.

Proponents, of course, can be expected to insist that Sen. Richard Shelby, R-Ala., chairman of the Committee on Banking, Housing and Urban Affairs, must move quickly to confirm a new board member. But in this instance, turnabout (and politics) is fair play. After all, supporters forced a floor vote in the House only by resorting to a discharge petition, which overrode committee jurisdiction and House leadership.