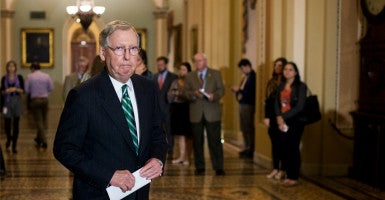 As the Senate gears up to debate the $1.1 trillion omnibus spending bill, conservative leaders are pushing back against a measure floated by Senate Majority Leader Mitch McConnell boosting the amount of money political parties can spend in coordination with candidates.

In a letter circulated among conservative groups, nearly 50 conservative leaders Thursday rallied in opposition to a campaign finance policy rider McConnell, R-Ky., will reportedly insert into the omnibus spending bill.

McConnell’s measure would lift the amount of money political parties can spend in coordination with a candidate.

“There is no doubt that campaign finance restrictions need reform,” the signatories said. “However, the McConnell rider provides preferential treatment to the Washington establishment and subordinates the voices of those who contribute to other multi-candidate organizations. Therefore, the Congress should not include this rider.”

Congress faces a Dec. 11 deadline to pass a comprehensive spending package, and lawmakers have already begun discussing a number of policy riders—measures attached to the bill that create new policy or limit how government funds can be spent—they hope to see included.

“The provision would apply to political parties only, setting up a different standard between the parties and multi-candidate committees,” the conservative leaders said. “Political contribution is a form of free speech, which is protected by our Constitution and should not be limited.”

The language of the policy rider has not yet been released. However, in addition to receiving opposition from conservative leaders, McConnell’s campaign finance measure also drew criticism from lawmakers on Capitol Hill.

At a monthly gathering with reporters Wednesday, Rep. Jim Jordan, R-Ohio, chairman of the House Freedom Caucus, said that his group of 40 conservative lawmakers would oppose McConnell’s measure.

“We think it’s not the direction we need to go unless you’re going to free up the restrictions on everyone else,” he said.

In a statement to The Daily Signal, Senate Conservatives Fund President Ken Cuccinelli criticized the provision for serving as a way to silence the grassroots movement that saw increased momentum after the 2010 midterm elections.

“Mitch McConnell’s campaign rider is a blatant attempt to give himself a political advantage over the grassroots who are disgusted with his leadership and want to elect new leaders to the Senate. McConnell and his cronies don’t like being held accountable so he wants to rewrite the law to help him crush conservative candidates,” he said. Cuccinelli continued:

McConnell claims that he’s pushing this rider to expand freedom of speech, but it only expands speech for establishment Republicans while Americans who want to change Washington get absolutely nothing.

McConnell’s office did not immediately respond to a request for comment.

According to the Federal Election Commission, political parties can currently spend $48,000 in coordination with House candidates and up to $20 million for presidential nominees.

Should McConnell’s policy rider pass, parties would be permitted to spend unlimited amounts in coordination with candidates.

Congressional leaders on both sides of the aisle have used massive spending bills as a vehicle for campaign finance policy riders in the past.

Last year, Senate Minority Leader Harry Reid, D-Nev., and former House Speaker John Boehner, R-Ohio, added a measure into a spending bill that raised the amount an individual could contribute to between $97,200 and $777,600 to party committees.

The contributions, though, are restricted to accounts for legal proceedings and party headquarters buildings, according to the Federal Election Commission.

This story was updated with the latest version of the letter, which contains additional signatures.