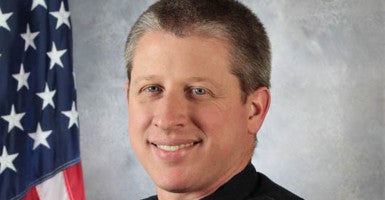 Garrett Swasey, the 44-year-old police officer killed Friday in a shooting at a Colorado Springs Planned Parenthood clinic, also was a devout Christian pastor who “believed in forgiveness” and “was there to save lives,” those who knew him say.

“He might not be in alignment with [abortion], but he’d be willing to go in and lay down his life for those people, and that’s just the testimony to me of the kind of man that he is,” Scott Dontanville, a co-pastor with Swasey at Hope Chapel, told CNN. “[He was] not just courageous, but Christlike.”

Swasey, a Massachusetts native, was a former nationally ranked figure skater who grew up skating with Olympic medalist Nancy Kerrigan. He was a six-year veteran of the police department of the University of Colorado, Colorado Springs. The father of two, he was married to his wife, Rachel, for 17 years.

He responded to calls about an active shooter about 11:50 a.m. Friday. According to reports, he raced 10 miles to the clinic after the call came in. He was one of the first responders on the scene.

Robert Lewis Dear, 57, is accused of storming the clinic and opening fire, killing Swasey and two others and wounding nine before a lengthy standoff with police. Dear surrendered hours later. The two others who died were Ke’Arre Stewart, 29, an Iraq war veteran, and Jennifer Markovsky, 35, a mother of two. Both were accompanying friends to the clinic at the time of the shooting.

Kurt Aichele, one of Swasey’s close friends and another co-pastor at Hope Chapel in Colorado Springs, told The New York Times that Friday’s shooting was not the first time Swasey responded to a high-risk call.

“It’s not the first time that he’s been placed in harm’s way,” Aichele said.

Although Swasey disagreed with “the abortion industry,” Aichele said, his personal views would not have dissuaded him from responding to the dangerous situation.

“He was there to save lives. That’s the kind of guy he is,” Aichele said.

Tributes to Swasey poured in over the weekend as friends, family, and fellow churchgoers celebrated his selflessness and enthusiasm for life at multiple memorial services.

Jason Churchill, who attended a service Sunday in honor of Swasey at Hope Chapel, told CNN affiliate KCNC that if Dear “were to repent and believe … Garrett would be the first one to greet him as he came into heaven, because Garrett believed in forgiveness.”

Swasey’s sister, Kimberly Swasey Noveletsky, wrote of her fallen brother on Facebook: “My brother was a hero in every sense of the word. He showed the world what kind of man he was yesterday when he made the ultimate sacrifice.”

On Sunday, Rachel Swasey released a statement calling her husband “devoted” and a “wonderful father” to their 11-year-old son Elijah and 6-year-old daughter Faith.

An online fundraiser set up for Swasey’s children so far has raised over $100,000.

A tribute to Swasey on the website for Hope Chapel, where Swasey was a member since 2001, reads:

You have blessed us for many years with your joy and love for the Gospel. As our dear friend and shepherd of the flock, with sorrow we say goodbye only to rejoice in heaven’s gain. Your life will live on in our hearts and your example has set the course for us to follow in the years to come.