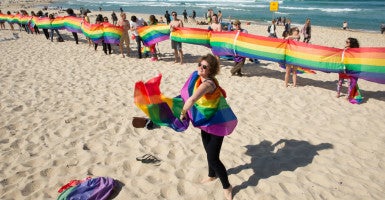 A Bermuda hotel canceled two events this week because the organizers believe marriage is the union of a man and a woman.

Ryan T. Anderson, a senior research fellow at The Heritage Foundation, was scheduled to speak on marriage at public forums Tuesday and Wednesday at the hotel in Pembroke Parish, Bermuda. But the hotel canceled the events, calling Anderson and others who hold his views “anti-diversity.”

In a statement provided to The Daily Signal, Allan Federer,  general manager of the Fairmont Hamilton Princess hotel, said:

It has come to our attention that a meeting to oppose gay marriage was to be held at our hotel. Immediately upon learning of the nature of the meeting, we called the organisation to explain that our policy is one that celebrates diversity and that the hotel is not a venue for anti-diversity discussions.

It is a standard hotel practice that upon making a reservation, groups disclose the nature of meetings that will take place on our premises. This meeting originally was reserved under a different guise and would never have been accepted if the group had disclosed its intentions at the time of the reservation. The Hamilton Princess does not accept any booking that promotes discrimination of any kind.

The group that booked the events with the hotel goes by the name Preserve Marriage.

“In the same week that we saw American farmers in court because they declined to host a same-sex wedding ceremony, a hotel in Bermuda has canceled the contract to host two public lectures about the topic of same-sex marriage,” Anderson told The Daily Signal. “It’s unfortunate the hotel doesn’t want to host civil discourse on an important topic, but that’s their prerogative.”

Anderson, the author of two books on marriage, is known for defending the historic definition of marriage as Americans increasingly accept same-sex marriage. He is Heritage’s William E. Simon senior research fellow in American principles and public policy.

Anderson’s work was cited by U.S. Supreme Court Justices Samuel Alito and Clarence Thomas in two separate marriage cases. He has lectured at universities such as Harvard, Yale, Princeton, Stanford and NYU, and has been interviewed on ABC News, CNN, MSNBC, CNBC and Fox News Channel.

Organizers have moved the events to a nearby church.

Tim Marshall, a lawyer with the Bermuda firm of Marshall Diel & Myers, told The Royal Gazette newspaper that the Hamilton Princess hotel appears to have violated Bermuda’s Human Rights Act of 1981.

“In my opinion, any hotel in Bermuda that refuses to permit a booking because of a customer’s religious or political opinions would be in breach of section five of the Human Rights Act,” Marshall said.

Because a hotel is a public place you shouldn’t prevent, as a hotel owner, the free expression of ideas for those people who wish to book a meeting room.