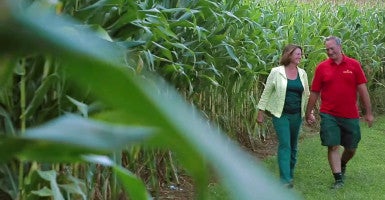 Cynthia and Robert Gifford, owners of Liberty Ridge Farm in upstate New York, appeal a judge's decision that found them guilty of discriminating against a couple based on their sexual orientation. (Photo: Patrick Frank/The Daily Signal)

The case against the owners of a small farm in upstate New York—who were ordered to pay $13,000 for refusing to host a same-sex wedding—moved forward Monday. Attorneys for the same-sex couple argued that the case is about the “same issues” as racial discrimination.

“We’ve been through this with race discrimination 40 years ago, and these are the same issues,” Mariko Hirose, an attorney for the New York Civil Liberties Union, told CBS 6 Albany after oral arguments. “We hope and expect that the court will uphold the public accommodation laws it has applied for many years.”

The dispute began in 2012, when Melisa Erwin and Jennifer McCarthy called the Giffords to ask them to host their same-sex wedding at Liberty Ridge Farm in Schaghticoke, N.Y., about 30 miles north of Albany.

Not wanting to go against her Christian beliefs about marriage, Cynthia Gifford told the couple they couldn’t host their wedding at Liberty Ridge Farm. Unbeknownst to her, the caller had recorded their conversation and shortly thereafter filed a complaint with the New York State Division of Human Rights.

In 2014, Magdalia Pares, an administrative law judge for the state, found Cynthia and Robert Gifford guilty of “sexual orientation discrimination.” Because Liberty Ridge Farm is open to the public for seasonal activities, such as its annual fall festival, the state of New York classified it as a public accommodation that cannot discriminate on the basis of certain personal characteristics, including sexual orientation.

Pares ordered fines totaling $13,000—$1,500 mental anguish fine to each of the women and a $10,000 civil damages penalty to the state. She also required the Giffords to implement “anti-discrimination training and procedures.”

In June, the Giffords appealed that decision.

On Monday, both sides argued their case before a five-judge panel of the Appellate Division of the New York Supreme Court.

James Trainor, an allied attorney with Alliance Defending Freedom, told The Daily Signal that during arguments, a lawyer for the New York Civil Liberties Union “was pushing that this was race discrimination all over again.”

That argument is “totally bogus,” Trainor said, adding that the McCarthys, who are now married, are “welcome to the farm any time.”

“It’s not about individuals or a group of people,” Trainor said. “It’s about marriage and religious ceremony which, to the Giffords, is a sacred event.”

>>> Commentary: 7 Reasons Why the Current Marriage Debate Is Nothing Like the Debate on Interracial Marriage

According to the Associated Press, Michael Swirsky, another attorney with the New York Civil Liberties Union, told the court, “We should not have a situation where people feel they are second-class because of their sexual orientation.”

The Daily Signal reached out to the New York Civil Liberties Union, but attorneys were not immediately available for comment. Since the lawsuit, the Giffords have stopped hosting wedding ceremonies to protect themselves from additional lawsuits and fines. (Photo: Patrick Frank/The Daily Signal)

Cynthia Gifford told The Daily Signal she felt that the arguments from the New York Civil Liberties Union were “one-sided” and didn’t take into account her broader constitutional rights.

“The other side just wants to talk about the discrimination law, and it’s all one-sided,” she said. “It’s all about them.”

Trainor argued Monday that the administrative law judge didn’t simply neglect to consider the Giffords’ constitutional arguments, but “she ignored them completely.”

Trainor is now hopeful that the appeals judges will consider the constitutional argument that the Giffords should be able to live and work in accordance with their faith and should not be compelled by the government to celebrate a message about marriage that violates their religious beliefs.

He expects a decision to arrive in January and said there’s interest “on both sides” to take the case farther.

The McCarthys were not present in court Monday, but Melisa McCarthy released a statement to press. Speaking on behalf of the couple, she said:

We will do whatever we can to make sure that no other couple has to deal with the same feelings of sadness and anxiety that we wrestled with from the moment we realized that, though the laws have changed, same-sex couples are far from being treated as equal.

Since the lawsuit, the Giffords have stopped hosting wedding ceremonies to protect themselves from additional lawsuits and fines. They continue to have wedding receptions at the farm.

Cynthia says the decision has “significantly” harmed their business.

“We were at 21 weddings per year, [and now] we’re down to five this year,” she said. “It’s not that people don’t want to be here; they truly do. I have more than enough initial meetings with people, but they want the whole package—including the wedding ceremony.”