Two Iraqi Refugees in 2013 Had Links to al-Qaeda 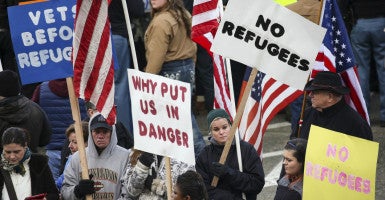 Protesters rally at the Washington state Capitol in Olympia against the U.S. accepting hundreds of Syrian refugees. (Photo: David Ryder/Reuters/Newscom)

Two Iraqi refugees in Bowling Green, Ky., were proven to be terrorists with links to al-Qaeda after being caught on camera handling heavy weapons inside a storage unit, according to a 2013 investigative report from ABC News.

ABC reported the FBI found that the two men, identified as Waad Ramadan Alwan and Mohanad Shareef Hammadi, intended to have the weapons smuggled to Iraq. They pleaded guilty to charges related to terrorism and were proven to have killed U.S. soldiers while in Iraq and conspired to attack homeland targets while in Kentucky.

Kurdish authorities arrested Alwan in 2006 in Kirkuk, Iraq, ABC  reported. He admitted during interrogation that he was an insurgent.

Kurdish authorities later released Alwan, 30, and he was able to enter the U.S. in 2009 as a refugee. Hammadi, 23, a relative of Alwan, also had been arrested by Iraqi forces and released. Like Alwan, he later entered the U.S. as a refugee.

The growing concerns mounting among U.S. citizens over allowing Syrian refugees into the country come in the wake of the Nov. 13 terrorist attacks in Paris for which the Islamic State, or ISIS, claimed responsibility.

Reports that one of the terrorists in the Paris attacks may have entered France with a Syrian passport added fuel to those concerns.

Kentucky Gov. Steve Beshear, a Democrat, has spoken out in favor of allowing Syrian refugees to resettle in the U.S., arguing that to turn them away would be to abandon American values and play into the hands of terrorists.

Gov.-elect Matt Bevin, however, has openly decried the idea. The newly elected Republican joined the governors of 31 other states in opposition to allowing 10,000 or more Syrian refugees on U.S. soil for the time being.

The governors advocate a more stringent vetting process for refugees to mitigate the potential threat of terrorists entering the country.

Texas Gov. Greg Abbott said in a letter to President Barack Obama that his state “will not accept any refugees from Syria” after the Paris attacks.

“We can query our database until the cows come home, but there will be nothing [showing] up because we have no record of them,” Comey said Oct. 21.

The House, by a vote of 289 to 137 on Nov. 19, passed a bill to halt admission of Syrian and Iraqi refugees until a more stringent, effective vetting process could be developed. Forty-seven of those voting in favor of the bill were Democrats.

Obama threatened to veto the bill if it clears the Senate. House Speaker Paul Ryan said the president’s threat “baffles” him, “especially given the fact that his own law enforcement top officials came to Congress and testified that there are gaps in this refugee program.”