‘Saints and Strangers’ Gives the Real Story Behind Thanksgiving 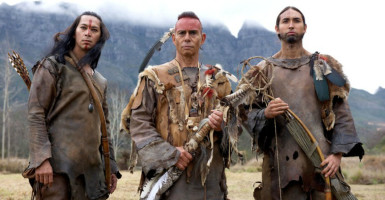 “Saints and Strangers” helps shed light on what took place in the first years at Plymouth colony, neither whitewashing events nor unfairly condemning one side or the other. (Photo: National Geographic Channels/David Bloomer via National Geographic's website)

As Thanksgiving Day approaches, Americans are preparing to give thanks for what Abraham Lincoln called “the blessings of fruitful fields and healthful skies.” In keeping up this tradition, Americans are hearkening back to the example set by the pilgrims and the members of the Wampanoag tribe almost 400 years ago.

In the fall of 1621, the pilgrims and the Wampanoag gathered to celebrate a bountiful harvest. William Bradford, the colony’s first governor, described the feast in great detail. It featured “cod, bass, and other fish”; a “great store of wild turkeys”; “venison”; and a healthy supply of “Indian corn.”

The celebration lasted for days and was the culmination of a hard-won peace forged between the pilgrims and the Wampanoag.

But since the mid-’60s, a cottage industry of historians and activists have churned out books and essays that cast a different light on the early years of the Plymouth colony.

In this sinister retelling, the pilgrims are portrayed as greedy capitalists who perpetrated deception, treachery, and genocide against the Native Americans. Instead of giving thanks for all we have, Americans should be mourning the myriad atrocities committed at the hands of our forefathers.

Thankfully, a new National Geographic movie is up to the challenge of refuting these dubious and historically inaccurate claims.

“Saints and Strangers,” which aired earlier this week, attempts to peel away the New Left revisionism in order to discover what actually took place at the Colony at Plymouth.

The Pilgrims and the various Indian tribes were not homogenous groups of people who mechanically followed scripts written by social justice warriors.

To the contrary, the pilgrims were composed of English separatists fleeing from religious persecution (the Saints) and adventurers seeking fortune (the Strangers). “Saints and Strangers” details the harsh conditions and the difficult choices the pilgrims often faced.

For example, early in the film, the pilgrims take corn from what to them looks like a deserted village. Later, Aspinet and his tribe attack them for stealing their food.

But it is not obvious that the pilgrims committed a wrongful act. A system of law respecting property rights had not yet been established.

“Saints and Strangers,” which aired earlier this week, attempts to peel away the New Left revisionism in order to discover what actually took place at the Colony at Plymouth.

And there is no doubt the pilgrims needed food to sustain themselves. Of the 102 Pilgrims who crossed the Atlantic, only 59 survived to see the first Thanksgiving.

Thankfully, the director allows the audience to think through these complexities without forcing a simple conclusion.

Neither does “Saints and Strangers” portray the Indian tribes in one-dimensional fashion.

In one instance, at a meeting of the surrounding tribes, Canonicus, the leader of the Narragansett, proposes a plan. For protection against the English, he asks each tribe for tribute. Massasoit, who heads the Wampanoag, decides not to join this venture.

A few days later, the Narragansett attack the Wampanoag as an incentive to agree to Canonicus’ proposal.

These are just a couple of the examples in the film that help break us from the pseudo-morality of pure good vs. pure evil that is increasingly popular today.

“Saints and Strangers” helps shed light on what took place in the first years at Plymouth Colony, neither whitewashing events nor unfairly condemning one side or the other. As the film shows us, reality is always more interesting than worn out political narratives.

Disclaimer: This reviewer was able to watch only the first part of the film, which ends in mid-summer 1621.