Obama’s Unilateral Immigration Amnesty Plan Gets to the Supreme Court 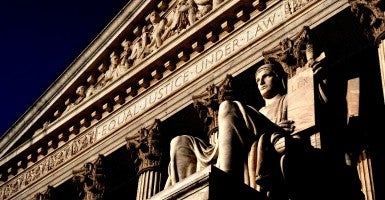 The government is appealing a preliminary injunction that stopped implementation of Obama’s amnesty plan, which was issued by a federal district court and upheld by the Fifth Circuit Court of Appeals on Nov. 9.

In an odd coincidence, Donald Verrilli, the solicitor general, filed the petition on the one-year anniversary of Obama’s speech to the nation on Nov. 20, 2014, where he announced his unprecedented, unilateral action to violate federal immigration law and provide lawful status and work permits to as many as five million illegal aliens.

The government’s petition asks the Supreme Court to take up the case, despite the fact that this is only a preliminary injunction. No permanent injunction has been issued, and no trial has yet been held. But Verrilli claims that review is needed now because of the “great and immediate significance” of the president’s amnesty plan and “the irreparable injury to the many families affected by delay in its implementation, and the broad importance of the questions presented.”

Of course, given that the Obama administration has virtually stopped all of its deportation procedures, with only some exceptions for certain criminal aliens, it is hard to imagine what “irreparable injury” all of these illegal aliens will suffer, since they have, in all practical terms, been granted “lawful presence” already even without the president’s official amnesty plan in place.

It is true that the preliminary injunction prevents the Department of Homeland Security (DHS) from issuing work permits to illegal aliens, but even that is probably not that significant for many of them, because employers all over the country know that the administration has no interest in enforcing federal law barring employers from hiring illegal aliens.

What Is the Government Arguing?

The government makes the same losing arguments to the Supreme Court that it made to the Fifth Circuit, all of which were disposed of by the court of appeals in a very thorough, well-written opinion. Verrilli claims none of the states even have standing to sue the federal government because any costs they incur from illegal aliens being granted lawful presence are just “voluntary.” This is almost a farcical argument, given the enormous education, health care, and law enforcement costs imposed on the states with the influx of huge numbers of illegal aliens into their communities.

Verrilli also makes the over-the-top claim that this injunction is “unprecedented” and “in violation of established limits on the judicial power.” Thus, “if left undisturbed, that ruling will allow States to frustrate the federal government’s enforcement of the Nation’s immigration laws” (emphasis added). Given how far outside the “established limits” of the president’s executive power under the Constitution the immigration amnesty plan is, claiming that it is the courts—and not the administration—acting outside the scope of their constitutional powers is almost insulting.

As the Fifth Circuit pointed out, it was the president himself who said that because Congress refused to amend our immigration laws to suit his interests, he had to “change the law” himself. That is a far cry from enforcing our current immigration laws as passed by Congress and signed into law by this or a prior president.

The government also reiterates the unsuccessful arguments made in the lower courts that the states have no claim under the Administrative Procedure Act (APA), the federal statute governing the issuance of new regulations and rules by government agencies.

The solicitor general continues to claim that Jeh Johnson, the secretary of the Department of Homeland Security, had “ample authority to issue” the “guidance” that implemented the president’s amnesty plan, including not just giving illegal aliens “lawful presence” status in the U.S. so they cannot be removed or deported, but also providing them with work permits.

Verrilli argues that the immigration amnesty plan and Johnson’s “guidance” should be exempt from all notice and comment requirements under the APA because otherwise “it threatens far-reaching consequences by constraining needed flexibility to adapt enforcement policies to changing circumstances and priorities.” To the contrary, the whole point of the APA is to force federal agencies like DHS to provide notice and an opportunity for the public to comment on major changes in rules, regulations, and policies.

The APA doesn’t stop agencies from having the flexibility needed to adapt to “changing circumstances and priorities,” but it makes sure they don’t do so in secret on an arbitrary and capricious basis without the public and individuals who will be affected by these changes having a chance to influence the agency. This is vitally important, since the purpose of the executive branch is to serve the best interests of the public as a whole, something that does not always seem to be the objective of this administration.

On Nov. 23, the Texas solicitor general, Scott Keller, sent a request to the Supreme Court asking for an extension of time to respond to the Justice Department’s petition until Jan. 20, 2016. Keller cited “pressing deadlines” in numerous other Texas cases before the Supreme Court, including oral argument in Evenwel v. Abbott, a redistricting case, which is scheduled for Dec. 8.

There is one thing that the government gets right: This is an important case that is vital to the future of this country, although certainly not in the way the administration claims. This case is about the rule of law and the constitutional limits on the power of the executive branch. So the Supreme Court may very well take the case. If they do, we have to hope that they uphold the injunction and don’t allow the president to act as an unchecked monarch who can change whatever laws he doesn’t like at will.