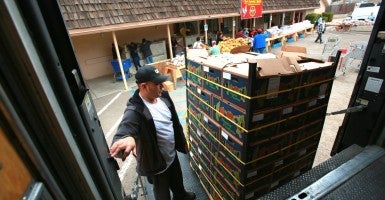 With Thanksgiving around the corner, charitable food banks across America are gearing up for their busiest donation season. Individuals and local firms supply a lot of the food, but donations also come by the truckload from major manufacturers and suppliers like Kraft, Con-Agra, and Walmart.

Before 2005, America’s largest network of food banks, Feeding America, had a terribly inefficient system for allocating truckload donations. In The Week, Alex Teytelboym describes how a top-down centralized process resulted in constant imbalances between needs and donations of different types of foods. There was no systematic way for a local food bank to tell headquarters, “We don’t need a truckload of bread, but we’re completely out of canned soup.”

In 2005, a group of professors at the University of Chicago’s Booth School of Business were asked to reform the system. They created a new form of money, called “shares,” which local food banks use to bid on trucks daily. Now the food goes where the need is most acute, as reflected in the highest bid price. The spent shares are redistributed daily; unspent shares can be saved for future needs.

Despite their inexperience with bidding—and sometimes outright suspicion of markets—the new system helped Feeding America to quickly increase its donations to local food banks by 35 percent.

Economist Alex Tabarrok called the shares “the best illustration that I know” of the foundational theories behind modern economics.

Prices help market participants share information about their needs and get food to where it’s needed most—whether or not the final consumers can afford to pay for their groceries.