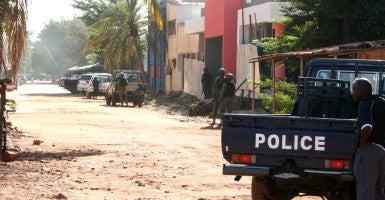 Bamako, Mali - Gunmen shouting Islamic slogans attacked the Radisson Blu hotel, which is frequented by foreigners, taking 170 people hostage in Bamako, the country's capital. At least 27 people were reported dead after Malian commandos stormed the hotel and dozens of people were reported to have escaped or been freed.(Photo: Harouna Traore/Panoramic/Starface / Polaris/Newscom)

Hard on the heels of attacks in Beirut and Paris, terrorists have struck again. This time, an unconfirmed number of gunmen stormed the upscale Radisson Blu hotel in Bamako, capital of the West African country of Mali.

Details are murky and likely to change in the hours and days ahead, but what is clear is that the attack represents a significant broadening of the war Mali is fighting against an array of militant and Islamic terrorist groups in the country.

For decades, the Malian government has struggled to assert control over stretches of its vast north. The Malian instability historically has stemmed from periodic rebellions by the Tuareg tribe that inhabits much of the north and parts of neighboring countries. They are fighting for a Tuareg state.

International Islamic terrorist organizations have become increasingly assertive in the region, with at least five operating in Mali. In 2012, an alliance of one of the most prominent Tuareg nationalist groups, the National Movement for the Liberation of Azawad, and several Islamist groups conquered swathes of northern Mali, including the famous city of Timbuktu.

A French intervention in 2013 rolled the militants back, but they are again ascendant. In June, the Malian government signed a cease-fire with a coalition of Tuareg secessionist organizations, but the patchwork of violent Islamist groups that routinely attack African Union and U.N. peacekeepers, as well as other targets, remains.

The assault on Bamako, which is in the extreme south of Mali, is a dramatic escalation of the violence. Virtually all of the instability and attacks have until now been confined to the north of the country, far from the capital. In March, a masked gunman killed five people at a bar in Bamako, which now seems a warning of things to come.

It is too early to know for sure which group is behind the attack, but al-Mourabitoun quickly claimed responsibility on Twitter. Al-Mourabitoun is a plausible candidate. It is a splinter group of al-Qaeda in the Islamic Maghreb (AQIM), which has operated in that region for years. In 2013, al-Mourabitoun gunmen stormed the In Amenas gas facility in Algeria and took hostages, just as happened at Radisson Blu. In August, it struck a hotel popular with U.N. staff in the town of Sevare, less than 400 miles from Bamako.

An al-Qaeda-linked group is ultimately likely to be responsible, as the attack bears the hallmarks of an al-Qaeda operation. The terrorists reportedly separated Muslims from non-Muslims, a gimmick al-Qaeda-affiliated groups such as al-Shabaab in Somalia frequently use to perpetuate the charade that they are not targeting Muslims. Al-Qaeda, and groups with whom it has links, also dominate the terrorist scene in northern Mali and the Sahel region generally, though the Islamic State of Iraq and Syria has a strong affiliate in nearby Nigeria. The choice of target—a prominent foreign-owned hotel frequented by diplomats and tourists—also has the symbolism that appeals to al-Qaeda and its ilk.

Authorities are still gathering forensic evidence at the scene to piece together what happened. There is already enough information, however, to serve as warning that the crisis in northern Mali has returned with a vengeance. The challenge requires committed, coordinated action from Mali with its neighbors and other stakeholders, such as the United States and France. Failing to do so virtually assures that terror organizations will continue to reach into southern Mali and well beyond.