Some States Talk About Border Security. Arizona Is Taking Action. 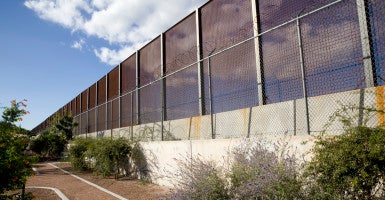 The border fence between El Paso, Texas and Juarez Mexico in a neighborhood park. (Photo: iStockPhoto)

While the presidential candidates clash over how to handle illegal immigration and border security, Arizona is doing something about it. When Doug Ducey ran for governor, he made doing something about all the illegal activity on the border with Mexico a cornerstone of his campaign. Since taking office, he has made a high-profiled effort to deliver. His latest move? According to news reports, the governor has ordered “ the Arizona Department of Public Safety to create a border strike force comprised of state troopers who will help law enforcement agencies along the Mexican border respond to crimes.”

There are lots of reasons why what Ducey is doing makes a lot of sense.

While securing the border is a federal responsibility and a core mission of the Department of Homeland Security, states have a vested interest in seeing that their border communities are kept safe and secure. The cartels that shuttle drugs, money, people, and guns back and forth across the border create enormous public safety issues for the families that live along the border. Local law enforcement is usually outgunned and overwhelmed. It makes no sense for states to stand idly by and watch their communities become superhighways for transnational crime.

There is also plenty of precedence for what Arizona is up to. Texas has been doing it for years. The Lone Star State has a robust effort, managed by the Texas Department of Public Safety, to help border communities.

Ducey’s strategy is also smart, as it focuses law enforcement efforts on the cartels. “There is no limit to the violence and lawlessness committed by criminals who use our southern borders to smuggle people, illicit drugs, and money derived from criminal activities,” he wrote. He is right.

The state’s effort would be far more effective if the federal government was doing its job. Ironically, where the government is falling down the worst isn’t on the border. Since the first amnesty bill failed to pass Congress in 2007, “the U.S. government has been spending billions on the border—some going to building hundreds of miles of border fence.”

By not enforcing U.S. immigration and workplace enforcement laws, letting criminals out of jail instead of putting them behind bars, and holding out the promise of more amnesty, the administration is creating incentives for illegal border-crossing and cartel activities that are overwhelming efforts to make the border better.

For starters, we need a federal government that does its job—meeting its obligations under law to enforce the law.

Next we need a president and Congress who are willing to fix our broken borders and flawed immigration system.