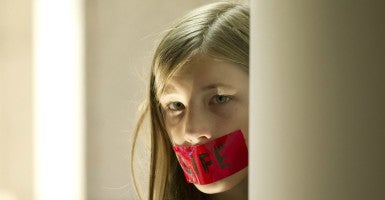 Clara Ramsay, 10, of Austin, waits with pro-life activists for the start of a legislative hearing at the Texas Capitol in July 2013. (Photo: Jay Janner/MCT/Newscom)

A spokeswoman for Reuters told The Daily Signal that the news agency will issue a correction after distributing a misleading statistic on self-induced abortion in Texas.

Reuters’ original report suggested that the rate of self-induced abortions has increased in Texas since the state passed a ban on abortion after 20 weeks of pregnancy.

“We are issuing a correction on the story and are looking into the error,” the spokeswoman for the wire service told The Daily Signal.

At least several news outlets published the questionable statistic regarding the legislation, known as HB 2 and signed into law by then-Gov. Rick Perry, a Republican.

The Texas law, besides prohibiting abortion after 20 weeks, put in place new regulations on abortion clinics—such as requiring physicians performing abortions to have admitting privileges at a hospital within 30 miles.

The statistic comes from a study by the Texas Policy Evaluation Project that concluded that 1.7 percent of Texas women of reproductive age had attempted to self-induce an abortion.

The study estimated that between 100,000 and 240,000 women aged 18 to 49 in Texas have tried to self-induce abortion since the law went into effect, using such methods as herbs, teas and medications obtained in Mexico without prescription.

Although the wire service’s report used the words “since the law went into effect,” the study did not ask women when they attempted to end their own pregnancies.

According to National Review:

Live Action News, a pro-life website, called for Reuters to issue a correction to its reporting on the study.

According to a press release from the Texas Policy Evaluation Project, 779 women participated in the online survey that was the basis of the study.