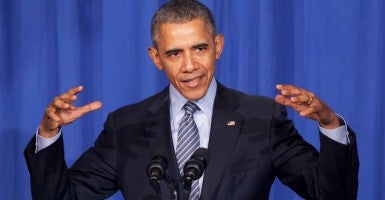 A House 'repeal' measure doesn't get at most of Obamacare's economic cost, a Congressional Research Service memo finds. (Photo: Polaris/Newscom)

A House bill that some lawmakers insist would repeal Obamacare doesn’t touch the lion’s share of the tax burden imposed by the Affordable Care Act, according to a congressional report obtained by The Daily Signal.

The report from the Congressional Research Service, dated Nov. 17, shows that 82 percent of the economic burden caused by Obamacare taxes would remain in effect even if what critics call the “partial repeal” bill became law.

“Information in this memorandum is largely from CBO [Congressional Budget Office] and JCT [Joint Committee on Taxation] cost estimates,” the memo from health care finance analyst Annie Mach says. “This memorandum reports the information CBO and JCT provide …  it does not provide analysis of or additional details for the cost estimates.”

The House’s partial repeal of President Obama’s signature health care law would reduce federal spending by $289.6 billion over the next 10 years, the report obtained by The Daily Signal concludes.

Full repeal of Obamacare, however, would cut more than twice that—$821 billion—over the same period.

The House bill takes aim at specific provisions of Obamacare, such as the individual and employer mandates to purchase health insurance. The legislation also would defund Planned Parenthood for a year.

But a great majority of health care taxes would remain intact. Of the 13 tax provisions originally included in the Affordable Care Act, also known as Obamacare, the House bill repeals just two. The bill would erase only taxes on medical devices and the so-called “Cadillac” insurance plans.

The report by the Congressional Research Service compares the effect of partial and full repeal of Obamacare on federal outlays, revenues and deficits from 2016 to 2025.

The House reconciliation package sent to the Senate could cut about $211 billion in revenues over the 10 years, according to the report. Even with that reduction, taxpayers would be left to shoulder a tax burden of nearly a trillion dollars over the next decade.

Full repeal of Obamacare and its taxes, in contrast, would reduce federal revenues by $1.17 trillion as of 2025, the report finds.

It says wiping away the Affordable Care Act completely would add $353 billion to the budget deficit over the 10 years; partial repeal would reduce the shortfall by $78.1 billion in the same period.

As the Senate takes up the House bill for consideration, plenty of opportunities remain for the legislation to stall. Democrat and Republican leaders are at odds over whether it qualifies for special status as a reconciliation bill.

At issue is whether the bill could neutralize a filibuster by Democrats and pass with 51 votes instead of the regular 60 needed in the 100-member Senate. To qualify for this status, Senate rules require legislation to be budgetary in nature.

Senate Minority Leader Harry Reid, D-Nev., said in a Nov. 12 memo that the bill is dead on arrival as a reconciliation measure because it doesn’t “primarily have a budgetary effect.”

A spokesman for Majority Leader Mitch McConnell, R-Ky., however, counters that the bill can be revived with a “substitute amendment” that fixes certain procedural problems.

If the bill escapes the Senate and makes it to his desk, Obama is expected to veto it.