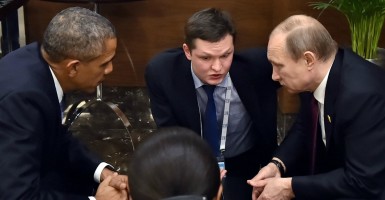 Russia’s intelligence services have finally admitted what most have already suspected: that a bomb brought down the Russian commercial airliner over the Sinai Peninsula last month, killing 224 innocent holiday goers.

It is unclear who the culprits are. Two employees from Sharm el-Sheikh airport have been arrested, and Russia has announced a $50-million reward for the arrest of others responsible.

Many nefarious groups have sprung up across the Sinai in the wake of former Egyptian President Hosni Mubarak’s fall in 2011. Even so, all signs are pointing toward the Islamic State (ISIS), or at least groups sympathetic to ISIS.

For those expecting Russia to change tack and start making its main focus in Syria about fighting ISIS, do not get your hopes up. For Russia, fighting ISIS and other terror groups in Syria has always been second to maintaining the Bashar al-Assad regime’s survival. Russian President Vladimir Putin himself has admitted this. Even the tragic downing of a commercial airline will not change this.

Russia’s main goal in Syria has always been, first and foremost, about keeping Assad in power. For Moscow, this accomplishes two important things.

First, Russia needs access to its naval base in the Syrian town of Tartus, and right now only Assad (or someone like him) can guarantee this. Without access to the base, Russia’s maritime influence in the Mediterranean Sea would be drastically reduced, and Moscow’s only toehold in the Middle East would be gone.

All this does not mean that Putin will sit around idly and do nothing against ISIS in response to the bombing.

Putin is a PR man, and he will have to be seen as doing something. His domestic credibility depends on it. However, his response is likely to be similar to what the French response has been so far to the recent terror attacks in Paris.

There will be a lot of tough talk from Moscow. Expect more video footage showing Russian bombs and missiles hitting a few ISIS targets in Syria. Putin may even use the downing of the airliner to crack down even further on the domestic Islamic extremism problem he has inside Russia. But do not expect a major change in the Russian policy of keeping Assad (or someone like him) in power at all costs.

The Obama administration wants the world to believe that there is now a newly found spirit of cooperation between Russia and the U.S. on confronting ISIS.

This is why contrived meetings and photo ops during the recent G-20 meeting in Turkey took place. Do not be fooled. Russia is no more interested in defeating ISIS after the bombing of the commercial airliner than it was before the attack, because doing so would mean abandoning the primary goal of keeping Assad in power.

The long-term strategic goals of the West and Russia, whether in Ukraine orSyria, or anywhere else, for that matter, are too diametrically opposed to be reconciled by the downing of a Russian commercial aircraft or the recent attacks in Paris.